The Last Page by Anthony Huso 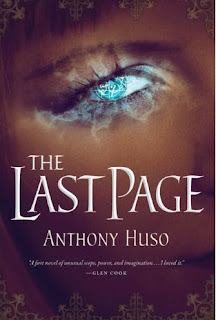 The Last Page is a glorious fantasy novel set in a steam-punkish Lovecraftian world. The new king of the duchy of Stonehold inherits an imminent war, and a cast of characters ready to advise and mold him into something that suits their needs.

Caliph Howl, a long time student learns everything he can about the duchy as quickly as he can. His ability to plot and strategize serves him well, but the seething city of Isca with its wonderfully named sections such as Three Cats, Ghoul Court, Murkbell and Lampfire boggles the imagination and provides him with unlikely enemies and allies.

There is a sisterhood of witches who are spies and assassins, and the most promising new talent in their cadre is obsessed with Caliph Howl for many reasons.

The world operates on magic and logic and mathematics.

There is a secret book called Cisrym Ta which is sought by all. Caliph Howl is its key.

When you turn the last page, you will want to know more about the city of Isca and its people, and having spent four hundred and fifty pages hoping for victory for Caliph and Sena, you will be sad and happy at the same.

You will be pleased to know that a sequel is in the works. I'm hoping the author is writing very very quickly.

Visit Anthony Huso's Site.
Posted by Librarian D.O.A. at 9:59 AM No comments: Links to this post 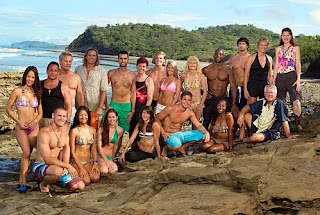 I always love Survivor, but this time out, the survivors will be split by age. The youthful beach lounging types will have to go after their fellow loungers instead of picking off the more well seasoned players.

Those thirty and below are on one team and those 40 and above are on the other. This can work even with physical challenges, I think, because it isn't just the pure physical stamina that wins, it is teamwork and competitive spirit.

It will be interesting to see which team has the stronger desire to show what they've got and the ability to work together to pull it off.

Survivor moves to Wednesday night this season, so grab your chair, your beagles and a cool can of pop and watch the fun!
Posted by Librarian D.O.A. at 5:08 AM No comments: Links to this post 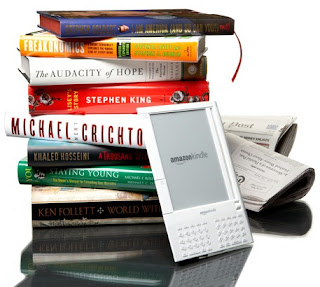 I've decided to enter the 21st Century as a reader and get a Kindle. One of our mystery book group readers has one and was quite enthusiastic and a staffer has one (and generously showed it to me) and with the new low Kindle price, perhaps the time is now.

One thing our staffer said that I liked alot was, if the price of a Kindle edition and the actual book are close, she gets the book. I love books and have too many, but what is life for?

Why get one at all, you say? I see lots of authors putting their own out of print titles out as Kindle Editions. It seems like wonderful opportunity to own some of those things you just can't get anymore.

In cases where you need a book for your book group fast and the waiting list at the library is over 400 people...zip, it is yours.

Also, since I learned about the Book View Cafe, I have wished that I could get some of those nice works of science fiction and fantasy right from a nice author consortium.
Posted by Librarian D.O.A. at 6:13 AM No comments: Links to this post

This Week in Dakota County

Thanks to a pal, I am now reading This Week in Dakota County regularly. It does a great job of covering local Dakota County cities and it is covering the budget situation for our county, which affects everyone who lives and works there.

Keep up with all the latest at the This Week newspapers site.
Posted by Librarian D.O.A. at 7:20 AM 2 comments: Links to this post

Buzz Off! according to the Online Slang Dictionary means:

To go away. Origin: from onomatopoeia "buzz", the sound an insect makes, implying that the person addressed is annoying and should leave.

I used to use that phrase all the time, in the 1980s or so when it was popular. It has a nice ring to it. Short, sweet. 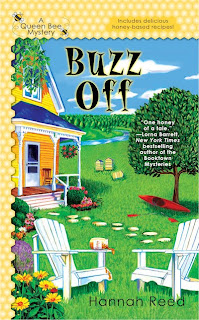 Imagine my delight when I found a new author named Hannah Reed, who was in the process of writing and publishing a new mystery called Buzz Off: a Queen Bee Mystery.

I was able to get past my mixed feelings about bees (love them for my plants, dodge them for the possibility of being stung).

Hannah is full of sass, style, and has more wise things to say on any given day than most of us ever think of.

Her book is set in the small town of Moraine, Wisconsin. Hello, neighbor! Story Fischer runs a wonderful store in a refurbished church. It has basic groceries items and stock from local orchards and farms, Wisconsin wines and cheese, and honey, that wonderful bit of gold. Everyone stops in at Storey's store.

As a hobby, Storey is learning beekeeping from her friend Manny Chapman. When the police pull up during her National Honey Month open house, she is shocked to find they want her to come to Manny's farm to help them. Manny has been found covered in bees. Someone needs to get the bees off of him so that he can be examined. Storey is that someone.

Since the bee blower is suspiciously missing, Storey uses a fan to remove them from Manny. Once he is pronounced dead, she immediately has to defend the bees and their hives. Locals want them destroyed. Bees leave their stingers in a person then die, reasons Storey. Yellow jackets do not and could sting over and over. It had to be yellow jackets.

How to prove this before the hives are destroyed, or sold to a mysterious beekeeper nobody ever heard of but who has suddenly appeared? The hives Storey keeps in her backyard are soon under siege from fearful neighbors. The journal Manny meticulously kept on his bees is missing.

More deaths occur and only Storey seems to make the connections to Manny's death. This is a well thought out mystery. I considered that just about everyone but the actual killer could be guilty.

I loved the town and its characters. Although Storey is trying to get over her sleazy ex-husband, he's her neighbor. Her high school sweetheart is buzzing around, as is the high school bully who might have a crush on her.

A rumor mongering neighbor with a telescope keeps an eye on everyone. Nobody likes a gossiping snoop, but Pity-Party Patti shines, seemingly believing most of what she makes up herself.

Storey's disapproving mom is always threatening to come and show Storey how to run the store and her life the Right Way. Good thing Storey's grandma is around to hip-check mom out of the way.

The local LIBRARY figures nicely into the plot. Dang those people sending out wierd messages from library Internet computers!

Recipes are at the back of the book making this one sweet read.

Hannah's alter ego is Deb Baker. Well, maybe Hannah is the alter ego since Deb is the real person and Hannah is a cute lil bee, as far as we can tell.
Posted by Librarian D.O.A. at 7:58 PM No comments: Links to this post