Stoopid iPad.  See what a mess? I'm going to leave it this way as a cautionary note.  When I wrote it there were spaces between paragraphs and no odd replacement words.  bah.

That juicy semi-regular feature makes another appearance, yay! Did you know that blogs are supposed to be sort of online diaries? Ya. My longest question of the week was an ebook question, no surprise. It is always hard to help people troubleshoot tech questions by phone, and in the case of ebooks you are really in trouble because not only can't you see what is on their screen, you don't actually know the device well yourself. Blind leading the blind indeed. Still, I patiently helped her work through. She even asked how I could be so patient at one point. I assured her if the device was in my hand I would be saying bad words and thinking of pounding on it, but since it was miles away no problemo. Kids are gearing up big time for summer reading. Rick Riordan's books seem like the favorite again so far. Hot hot weather for the garden and not so much rain, so I'm out watering the veggies and annuals twice a day. They seem happy. My celery looks fine, and my tomatoes are lush so if those picky guys are happy all must be well. The Little Marvel peas seem happy enough though some I purchased as plants rather than growing from seed are all wilty. Very pleased with another successful dungeon run with my tank. Since Mr. D.O.A. Was interested in going in with her I went random and got Wailing Caverns. I feared I would get lost, but I hit all the marks. There was a Worgen paladin being an utter turkey, stealing aggro, rolling need on everything, not letting some poor hunter try to tame a beastie. I was trying to boot him when he left. I have had trouble in each dungeon with some galoot trying to outdo my tank and I am thinking it is an epeen thing...they don't want to be shown up by a pink pigtailed gnome. Poof, I say. Ready for my next book, and I have a grand pile but I really want to read Charlie Higson's the Fear next, just available in the U.S. the library doesn't own it so must order it. Blah blah blah. Pictures to be added later. Writing on my dingly iPad.
Posted by Librarian D.O.A. at 7:02 AM No comments:

I finally got my Warrior to level 15 and gave her all of the armor, potions scrolls and jewelry I could make.  I have never seen a Gnome tank in the dungeons but they must exist, right?  The goggles are an Engineering piece of headgear that adds to her stats.  Looks fierce too, right?

My first group was composed of bozos from bozoville.  Things happen fast but I think there were two hunters and they were the most obnoxious I think I've seen.  Just shot at everything, gave me no chance to run in and get aggro.  They're lucky I can't type fast or their eyeballs would have been singed, I say, singed.  So, I barreled on ahead while they were delicately picking up loot.  As soon as the dungeon was over I left without a word.  Smokin.

Right back in, I get a really good group, everyone does what needs doing and we zoom through.  People really should try all the roles so they see how easily you can hose things by being a dufus.

I'll calm down tomorrow.  I really stressed over doing well at this particular role, and I think I did everything right but yo. 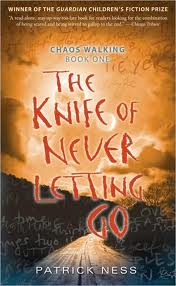 I'm trying to just get my book "reviews" out there instead of waiting till I can do it juuust right and never doing it.

I finished reading this pretty late last night and I think it got into my dreams. Tsk.  It was recommended by co-workers who warned me it was sad and a particular plot point was easier to take because I was prepared for it.

Except for one bit of plot I didn't find it to be sad, just a real page turner.  It is sort of a prolonged chase from beginning to end.

Todd will reach manhood at thirteen.  He is the last boy in his all male settlement.  When you reach thirteen you become a man.  Everyone can hear everyone else's thoughts thanks to a disease inherent on the planet this group has settled on.  There are only men because women were killed by the disease.  As far as Todd knows, they are the last survivors on the planet.

One day however, Todd is in the swamps with his unappreciated dog companion Manchee and he meets a girl.  Impossible, but there she is.  Even more impossible, he cannot read her thoughts.  After a short lifetime of finding ways to block out the random chaotic thoughts of his fellows, this "silence" is beyond unnerving for him.

He rescues her from Aaron, a shamblingly evil  man who cannot be killed or even slowed down, it seems.  In his confusion over this incident and the finding of the girl, he returns home to find his guardians are packing his bags and that they are determined to set him on the road on his own to escape something they will not name.

Joining him on the journey is the dog Manchee who is simple yet loyal and the girl who says nothing and apparently thinks nothing.  Todd has a map that he can barely read and the directive to run and get away from Prentisstown as fast as he can.

He soon finds that the entire town is in pursuit of him and his companions as he runs and runs trying to stay ahead of them.

The developing relationship between Todd and the girl Viola is a representation of what the larger society should be, but is not.  Todd is not just the last boy in his settlement, he is the last hope for everyone as he acts to fight his inner chaos, and to deny that he can be shaped by the thoughts of others. 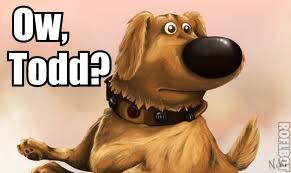 Patrick Ness's Website﻿
Posted by Librarian D.O.A. at 7:31 AM No comments:

Yet another semi-regular feature you'll never see again!  I am sooo funny.

Tidbits from the real live week of D.O.A.!

Our library's Facebook page featured a local girl who had won in the Letters about Literature competition.  The old idea of writing to your favorite author and telling them how their book changed them or made them think is turned into a unique set of letters from kids of all ages.  Some of them are so touching, including that of our local girl.  Take a look at the Winning Letters tab.

The CAT, owned by my son but living with us for the nonce continues to charm.  He thinks he is such a mighty hunter out in the yard.  Inside the house, I am eternally grateful to see NO SPIDERS or any other bugs.  Part of me regrets to report he eats them after he kills them. 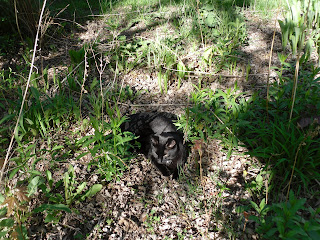 I've been meaning to share this Shakespearean rendition of The Three Little Pigs for awhile:


38 Studios, that grand and glorious place of wonder, hubris and undaunted imagination went under.  I could not be more surprised and saddened.  I've seen many game studios come and go but these guys had so much going for them. In my heart they are still where they started, as the unbelievably cool Green Monster Games.  I'm hoping they can find investors and find their way out of the mess they're in.

I helped a lady at Eagan's reader bar with her Nook this week.  It really helped me to help her walk through the process, and thank goodness she had her laptop with her.  Having the Nook so tied to a particular pc (and in this case horror of horrors a MAC) is a real pain when you're trying to help someone work through the process. 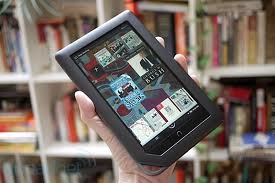 It doesn't help me at all to "practice" on the eBook devices or read tipsheets or anything unless I've helped someone through the steps myself.  If I see the actual steps and what happens when you take them, see the messages that pop up, see where to find the dang books on your pc and then on your device (not so easy as you'd think!) then I can see the process in my mind next time I do it.   I wrote down the basics for myself as soon as we were done and now I can help anyone much more effectively.  I hope!  Visual learner city.