A Word from our cartoon self

Click on the cartoon to see the entire glorious thing:

Posted by Librarian D.O.A. at 3:25 PM No comments: Links to this post

Have yourself a Merry Little Christmas!

I purchased our copies of all four dances because I just loved them. I think that the video quality on these is much fuzzier than it was on the trial copies. Still you can make us out merrily stomping. You will need to click on the arrow to "play" the videos instead of just clicking on the picture.

We do the Charleston 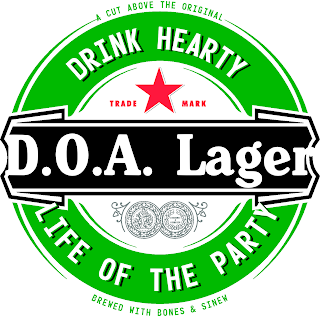 That's from the Generator Blog, of course. I have several useful and entertaining blog posts backed up in the D.O.A. file cabinet, but I'd rather be an idiot and post something fun and useless like this. Yo ho ho and a bottle of...D.O.A.

(Note: I rarely drink anything except coffee, Pepsi and water. If I did have something though...Heineken, glug glug glug.)

This logo and other interesting party oriented graphics come from Festisite It includes a generated St Nicholas Day poem (?) which was in Dutch, I think. Since I don't read Dutch and get in enough trouble in my own language, I didn't try that one.

I can see lots of use for this playing card (you can choose which card you use, since I'm such a sweetie I went with the Queen of Hearts...they didn't let me replace the word Judith with D.O.A., the buzzards). 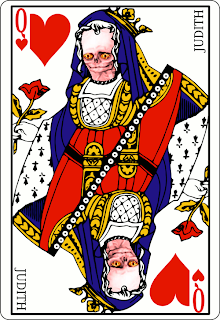 They have a cute dollar bill (and other denominations) that you can put your picture into but I couldn't get the image to save with my skullish photo inside of the oval. Boo hoo. Like I'd be trying to pass a 1966 Dollar Bill with the D.O.A. logo inside at my local Target store or something. hmmmpfh
Posted by Librarian D.O.A. at 6:28 AM 1 comment: Links to this post 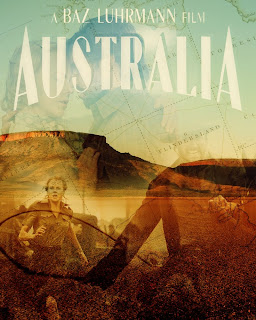 I had a chance to see this over the weekend. I had read a little bit about it but not enough to spoil the plot. I really like both Nicole Kidman and Hugh Jackman, so seeing a film with them both set in their native land was a big draw. Also I liked that this would be a throwback of sorts to the old epic, large type film that they don't make anymore, the beaners. Lastly, Australia is on the short list of places I've always wanted to see.

I'd rate the movie 8 out of 10, probably because going in I had so many positive things I was looking forward to. The film is big, it shows life on a ranch in Australia at the opening of World War II, it certainly succeeds in showing a snapshot of the time and the people.

The plight of the aboriginal people was brought to the fore in a very wise way. They were just wonderful characters, shown to have a very different culture and outlook.

My only criticism would be that the movie did feel long, it seemed that too many storylines and subplots were presented. I thought they should focus more on the everyday life of the people or bring the war story forward and focus on how the characters played out their existences under enemy attack.

Other than that, the good guys were good, the bad guys were really bad, the setting was remarkable.
Posted by Librarian D.O.A. at 6:23 AM 2 comments: Links to this post