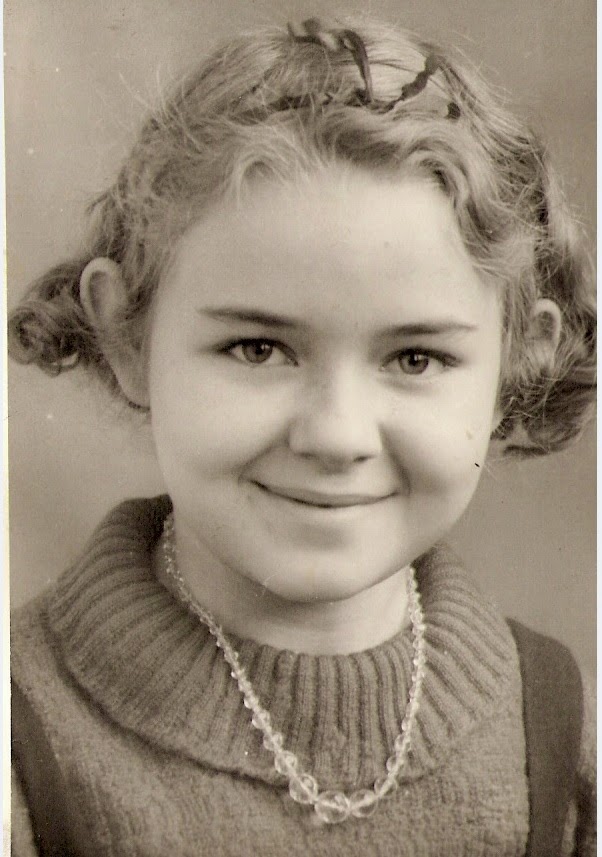 This little girl grew up to be a mother of eight kids.  Why this didn't unhinge her (more) I don't know.  One child changed my life and how I see the world.  Imagine eight!

She tried and mastered every sort of needlecraft.  Her sewing skills kept us all in charming dresses and she began making wonderful "soft sculpture" dolls and toys at one point.

Although mom would not admit to being a good cook,  she could work wonders with almost no ingredients, which is usually what she had at hand.

Mom took up painting at mid-life and did landscapes and portraits and she loved re-creating on large canvases the work of The Masters.  She dreamed of having a gallery in her house of her work.

Unlike me, she was good at math.  Why, why she couldn't pass a bit of that on, I don't know.

Apparently her father insisted that the kids learn how to do every single thing they could.  So, she could do carpentry and plumbing and electrical work.  A new room or a porch could be created by her in the space of a day.  I know she didn't go to the library for books on how to do things, so she must have sketched out what she wanted to do and the dimensions of the project in some near blueprint way, and off to the hardware store or lumberyard she went and she'd come back with what she needed.  She never had a truck so she'd have boards in the back seat sticking out the windows.

She had a long illness at the end of her life but she payed no attention to it and always thought she'd get better.

If you were sad or down you could sit on the floor by her tiny little self, listening to the puff puff of her oxygen tank while she brushed the hair back from your face and told you everything would be alright.

To all the moms who are everything in the world to their kids as she was to us, Happy Mother's Day, and give that lady a big hug if you're lucky enough to still have her.

Posted by Librarian D.O.A. at 8:38 AM No comments: Links to this post

Doctor Sleep is a sequel to King's 1977 novel The Shining.  Ignoring film versions of the story, The Shining remains for me one of the best and scariest King novels.

King excels at putting good, plain people in the way of incredible horror.  He knows what scares you, and he piles it on to your delight as you read. 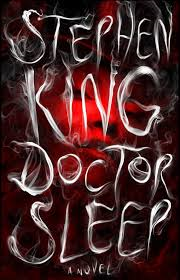 The Shining had an evil, haunted hotel with room after room of ghastliness.  A small family trying to survive snowed in, isolated and left to deal with everything that crawled and flew out of their own psyches and the brooding history of the Overlook hotel.

At its core is Danny, who has The Shining.  An ability to know and see things most cannot.

In Doctor Sleep, Danny is grown up, scarred, wounded, barely sober.  A reflection of the father who tried to kill him.

Much of the novel deals with Danny's battle to remain sober in the face of new horror.  The new horror is The True Knot, a wandering group who find people, especially children, with the Shining.  They torture and devour the "steam" from those they catch to prolong their lives.

Danny makes his way to a small town in New Hampshire where he finds employment and tenuous sobriety.  Working in a hospice, he becomes known as Doctor Sleep.  When a resident is about to die, a prescient cat in residence goes to sit by them.  Danny is able to talk with the dying patient and help them relax into their permanent sleep.

Also in this town is a little girl named Abra who is filled with the Shining.  Even as a baby she was able to do things that powerfully affected her environment.  She has telekinesis, is able to view events far away and see them coming and can read minds.

As the True Knot kills a young man, Abra somehow is aware, and right there with him.  She becomes aware of the True Knot and they become aware of her, setting in motion a cross country power struggle between a young girl and Rosie The Hat, leader of The Knot.

Danny is drawn in over time by messages from Abra which appear on a blackboard in his room.

The True Knot appear as a bunch of old people traveling peacefully across America.  They look like every old codger you ever saw and are immediately dismissed from memory.  I love how King is able to make you think hmmm, those harmless old folk, probably ruthless killers.

In place of the claustrophobia that infused the Shining is the inevitability of confrontation and ultimate loss in a battle between good and evil, something that King always puts before us.  I really only like happy endings, and those are never guaranteed in a King book which keeps you reading even as you hardly dare to turn the page.

Posted by Librarian D.O.A. at 9:27 AM No comments: Links to this post

Locus is a long running magazine devoted to science fiction and fantasy.   It is filled with reviews and author interviews.  http://www.locusmag.com/

Snared from their page:

The Locus Awards are presented to winners of Locus Magazine's annual readers' poll, which was established in the early '70s specifically to provide recommendations and suggestions to Hugo Awards voters. Over the decades the Locus Awards have often drawn more voters than the Hugos and Nebulas combined. In recent years Locus Awards are presented at an annual banquet, and unlike any other award, explicitly honor publishers of winning works with certificates.