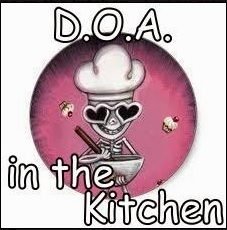 Ok, we have a moratorium here at DOA Central on Rice Dishes.  Hard on the heels of last week's Hamburger Wild Rice bust up, we try Chicken Fried Rice.

I spare you a photograph of my results.  Here's the Life in the Lofthouse pic: 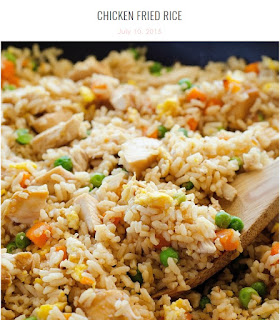 Nobody liked it.  One soul feared to be seen sliding it into the trash and had a counterpart do it.  No blame on this one.

So it turns out I can't make and maybe have never successfully made plain white rice.  It's always gummy and glossy and looks vaguely like an albino brain.  Ya.  The pre-made, pre-cooled stuff went flying out of the bowl it was stored in and might have dented the stove top if it hadn't landed in the fry pan.  (Insert Sad Face).   I did my best to break the ball up and incorporate it into the ingredients already in the pan.

While the chicken was nicely tender, ( I had it in a crockpot as the recipe suggested) the Teryaki sauce had a taste I didn't care for at all.

I thought it could have used more of these, one cup was pretty spare.  Taster Number 2 was horrified there were peas in the dish.   He would have liked it without peas, he said.   I think he doesn't notice them in chicken pot pie somehow.

There are three tablespoons in the recipe, but as always  I was able to douse the stuff with more and I kinda killed the teryaki flavor, and I pronounced it not too bad.

Mr. DOA (aka the Final Arbiter) said it was "ok" and he didn't really like it, but he took some for his lunch.  Mr. Sweetie of the World.

Posted by Librarian D.O.A. at 5:16 PM No comments: Links to this post

The casserole earns Mom's Tastes Like Your Foot's Asleep award.

It was poorly received by the locals, who pushed it around a little on their plates, after a bite, then slid it into the trash.

I personally thought it wasn't bad when doused in soy sauce.

Mr. DOA doesn't think it's as bad as " some of the things you guys come up with".

I think if broth was used instead of water, and maybe a few spices were added, this would be not a bad little meal.  I've never worked with wild rice before, and I am not sure if it was supposed to be sort of rubbery/crunchy.  I suspect not.  I certainly gave it the full hour of soaking.  Maybe it wants double that.

The fruit and bread were a nice accompaniment.    I really like planning meals with multiple parts and things that lighten up heavier dishes.  Also, if a new dish turns out to be blech, you have something else to eat. 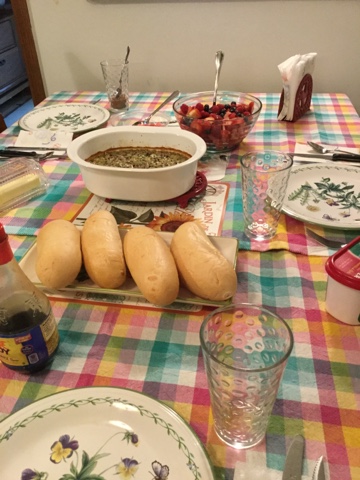 Posted by Librarian D.O.A. at 4:59 PM No comments: Links to this post

This year's babies hatched Tuesday evening and the next day mom was ready to lead the ten ducklings out of the yard and to the pond. 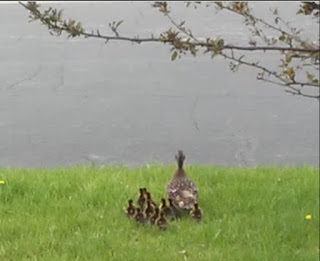 The pond isn't far, but I worry about them making their way safely past people and dogs and children.   Then, Thursday afternoon when I went out to the shed, the mom and dad were in the yard squawking at me.  For a moment I thought, did they lay another set of eggs so soon?   Then my worrier mind thought something happened to their babies and in grief they were back guarding the last place they were safe.   I'll have to walk around the pond and see if they're all sailing happily along.
Posted by Librarian D.O.A. at 11:16 AM 4 comments: Links to this post