While looking for a graphic to go with my songs I came across a meme that allows you to do a bit of free association (the verbal version of the classic InkBlot Test):

You just go ahead and write the first word that comes to mind when you read each of those words. Uh huh, Veeeery interesting!

For more "I say...You think" memes visit Unconscious Mutterings
Posted by Librarian D.O.A. at 8:59 AM No comments: Links to this post

Now Playing in the Radio of the Mind 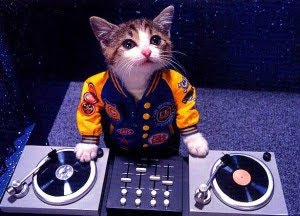 I marvel at the way the mind deals with stress and other events in this life. My mind seems to be responding with songs from the past. In the last couple of weeks, these songs have been stuck in my head:

Madworld by Gary Jules for its "what a crazy world this is" sentiment.


Black and White by Three Dog Night for its "why can't we all get along" thinking.


This morning, perhaps on the announcement of my niece's engagement, I'm hearing "Everybody Loves Somebody Sometime" by Dean Martin

Posted by Librarian D.O.A. at 8:35 AM No comments: Links to this post

While re-working a class on Internet Practice I found a search engine site that searches blogs called Icerocket. I love blogs for the personal opinions on a wide variety of topics that I'm interested in.

If I want to see if anyone has reviewed a book or game or anything, I can use Icerocket to find recent blog entries.

I'm always looking for new book blogs and I can find those as well.

Gardening and technology tips are two other areas on my own interest where I can really appreciate a personal point of view and experience.

It works best to search for a specific title or topic rather than broadly searching for a subject such as mystery or gardening. Try a title instead: Anthem for Doomed Youth Carola Dunn or melons Minnesota to find blogs of interest.

Try Icerocket
Posted by Librarian D.O.A. at 8:09 AM No comments: Links to this post

There is a fun article in this morning's Star Tribune about childrens author and illustrator Nancy Carlson. Her publisher encouraged her to try some social media type things to keep her name out there and she came up with a visual daily blog with a drawing a day. She is enjoying drawing whatever she fancies (and she is one of the most fanciful illustrators imaginable).

The article reminded me that Nancy Carlson is probably the first author who I ever went out to see at an event. My toddler son and I were huge fans and we went to a library event, so excited that the creator of books we loved was right there in the same room with us. She was funny,wise and charming.

Enjoy her work at www.nancycarlson.com
Posted by Librarian D.O.A. at 7:08 AM No comments: Links to this post 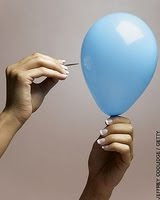 Booktrailer for Hellhole by Brian Herbert and Kevin J. Anderson

Available now, a novel of colonization and criminals. I'll have to snap this up :)
Posted by Librarian D.O.A. at 5:41 AM No comments: Links to this post 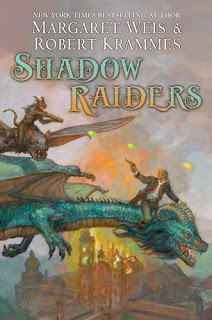 Shadow Raiders is the first book in a new series by Margaret Weis and Robert Krammes which is set in the world of Aeronne, where continents are islands floating on gaseous cloud masses called The Breath.

Shadow Raiders is a grand adventure with spies, assassins, dragons, demons, a religious brotherhood and a Cadre of the Lost, all seemingly working towards and against the same goals at once.

Mysteries abound. A Master Assassin guards a pewter tankard and kidnaps it's impoverished maker. One hundred nuns are brutally murdered, their bodies all but devoured at a remote abbey. Someone called the Warlock distracts a powerful priest at just the right time. There are hints that all magic could be destroyed as if it never existed in the world.

At the heart of the novel are a wide array of characters.

Henry Wallace, the assassin, dotes on his wife and soon to be born child.

The grumpy priest Father Jacob misses nothing in his investigations. Something of a bad tempered Columbo, perhaps.

Brother Barnaby, my favorite character, is a humble monk whose mission in life is to serve God and Father Jacob. He trails after Jacob, blanching at the terrible sights he sees, yet he faithfully records everything on his portable writing desk. He is an extraordinary healer and his compassion for all things is unparalleled.

Rodrigo, who at first seems like comic relief, turn out to have quite a bit of depth.

At the heart of Stephano's life is the tragic story of his parents who were unable to find even a moment's happiness. His father executed, his mother a cold calculating spy, Stephano longs for:

"...the love of all that is holy, just give me a straight up, stand-up sword fight! I hate court intrigue and all the closet-hiding, eavesdropping, secret-liasoning, lying and manipulating, who's-watching-who bastards that bow and scrape and simper as they slip arsenic into your claret. You can't tell your friends from your enemies from one day to the next. What the hell is wrong with you people?"

Practical Stephano, former captain of the disbanded Dragon Brigade is truly surrounded with a Ludlum-esque amount of intrigue at every turn. It seems that everyone he knows sees the intrigue or is involved in it. Stephano looks for the obvious explanation that never comes.

Volume one of the Shadow Raiders presents a rich world, great characters, and plenty of action. Here's hoping the sequel is well under way.

Shadow Raiders will be published by DAW Books in May 2011.

Margaret Weis on the web: Margaret Weis Productions (Where they describe Shadow Raiders as a military fantasy, but I would call it action, adventure, romance!)

Margaret Weis on wikipedia with a bibliography of her work.

DAW Books
Posted by Librarian D.O.A. at 9:25 PM 2 comments: Links to this post

Cartoon Day: Keeping up with the Bestsellers

Click to enlarge. The Toonlet link left the final panel off, gasp. 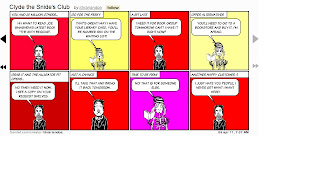 Posted by Librarian D.O.A. at 9:39 AM No comments: Links to this post 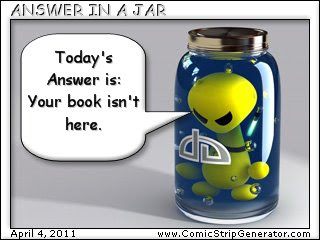 Although the day is only partially over, "Where are the books I put on request?" is the top question of the day, and for whatever reason, most people who ask today don't actually have anything here.
Posted by Librarian D.O.A. at 2:36 PM No comments: Links to this post