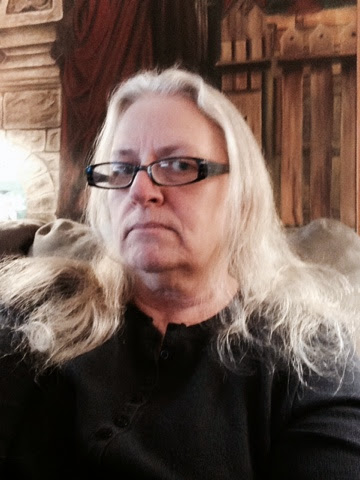 Posted by Librarian D.O.A. at 11:18 AM No comments: Links to this post 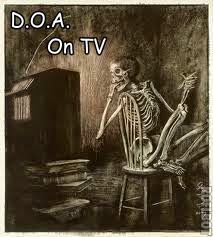 There are a few new and returning shows on my schedule.  I would like to have something every night but, meh.  Wednesday looks like an alternate entertainment night.


Person of Interest (record for later)


Doctor Who Night  Netflixed David Tennant episode then at 8 Peter Capaldi Who.


Once Upon a Time


Downton Abbey (January)
Posted by Librarian D.O.A. at 10:36 AM No comments: Links to this post

D.O.A. at the Movies: Maze Runner


I watched all the clips of The Maze Runner movie, and follow the Maze Runner Trilogy and the author James Dashner on Facebook.  I had a few concerns going into the film:


I didn’t like that Teresa and Thomas couldn’t speak telepathically, though in retrospect I can see where that complicates things in a two hour movie. 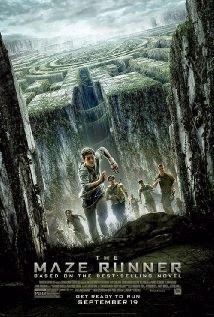 From the clips, I didn’t think I’d like the actor playing Thomas, he seemed kind of gravelly voiced and flat.  In fact, Dylan O’Brien as Thomas completely nailed Thomas and his confusion as he entered the Glade and it’s world, and he had the honesty and vulnerability of Thomas in the book, so I was really pleased.


I really liked the portrayals of Alby, Newt, Minho, Chuck and Gally.


I didn’t care for the Teresa character, but having read the entire book series, I think I just don’t like her as a character so I was swayed by that.


I would like to have seen more time spent on the really well organized society the boys created.  More time could have been spent in the Maze itself.


The way out of the Maze and the final battle there was way cooler in the book, and I think they should have stuck with that.


Since they were varying from the book in so many places, they could have altered Chuck’s fate, right?  Sometimes the film version can have a happier ending than the book.


Filming is already set for the sequel : The Scorch Trials to come out in late 2015.  That was a great adventure, and I can’t wait to see how they bring it to the screen.
Posted by Librarian D.O.A. at 10:37 AM No comments: Links to this post

Happy Wishes to Me

J   Here I am, good to go for another year.  Yay me, I say.   Some people get all weasely about birthdays, but I’m pleased to get another one.  I look at them as an opportunity to start fresh, sort of like New Years.  This last year has been actually very nice, one of the first in a great while I wouldn’t categorize as being “a rough year”.  Nobody likes a rough year.


I’m excited to have an all new year stretching out in front of me.  I had such a structured plan for how I’d do things this last year.  I incorporated many of them into how I actually live my daily life.  I should start this next one with an all new plan, an even better plan.   I’m not certain of what it is, because this is the very first day of my glorious new year, but I’ll be making lists shortly.  I love a good list. 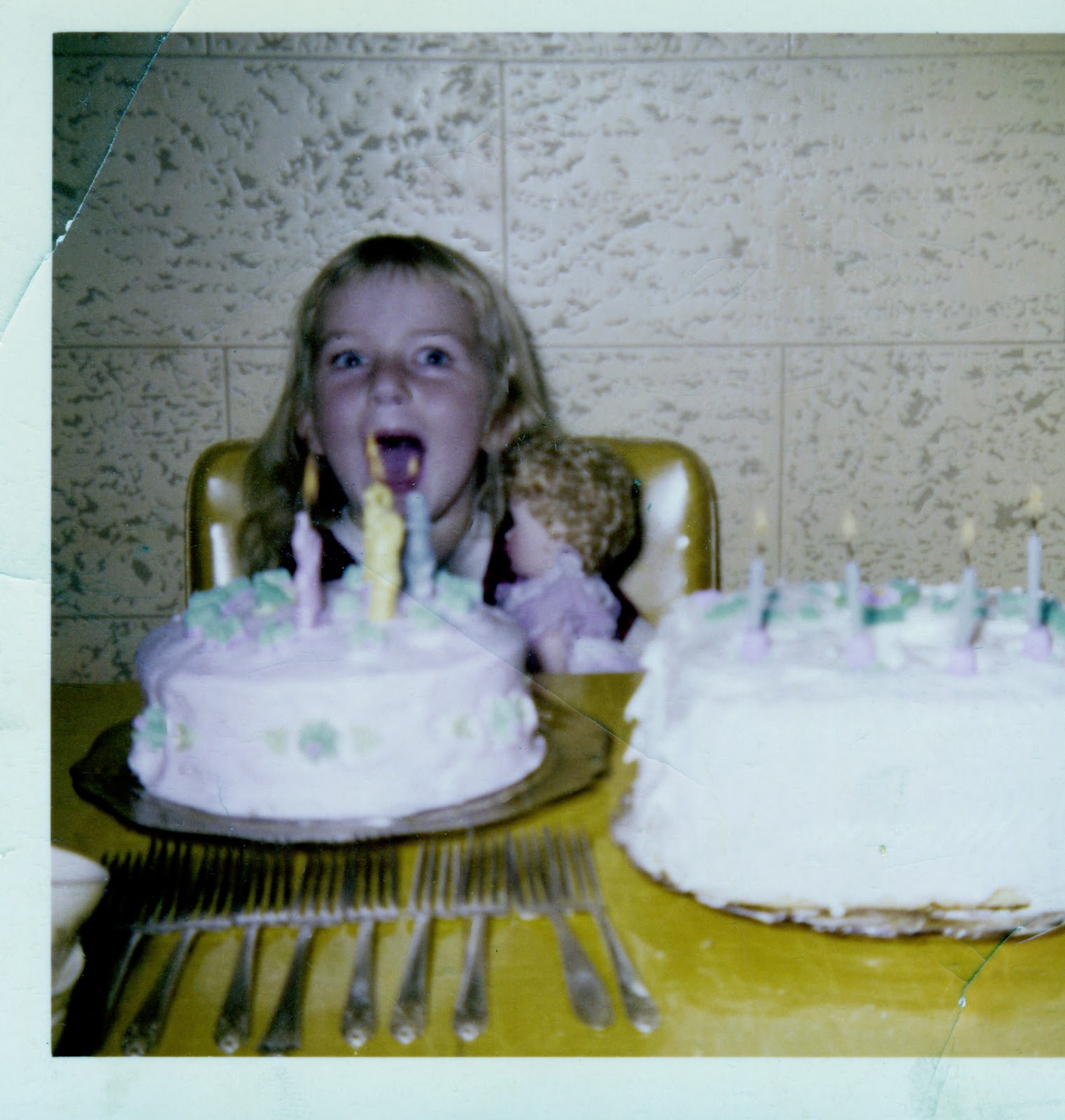 
The Maze Runner by James Dashner 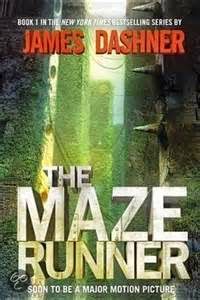 I saw this author at Comic Con in 2012 on a panel and he seemed so nice and kids at the library just loved his Maze Runner series, so I finally got around to reading this recently.  Maze Runner is the first in a series.  As soon as I finished the Maze Runner I ordered the next two and just zoomed through them.


As it happens, the film version of this comes out tomorrow.  A few things in the previews I’ve seen make me twitch but the buzz on the movie is good, so I guess I’ll go with the flow and enjoy the movie.


A teenage boy who knows only that his name is Thomas wakes up in a cage like elevator which seems to take forever to travel to the top of its journey.  He is met at the top by a group of teens who call him such odd things: Klunk, shuck-face, Greenie.


They stood in a vast courtyard several times the size of a football field, surrounded by four enormous walls made of gray stone and covered in spots with thick ivy.  The walls had to be hundreds of feet high and formed a perfect square around them, each side split in the exact middle by an opening as tall as the walls themselves that, from what Thomas could see, led to passages and long corridors beyond.


Sixty or so boys are captive in the Maze, with a new one showing up in The Box once a month.  The boys have created a society for themselves with everyone having a job to do, rules of behavior that all are expected to follow.


The first rule is that only Runners are allowed in the Maze.  These boys literally run through the Maze every single day, creating a map from memory that they duplicate in The Map Room.  The Maze is not static and changes every day.  The kids are determined to solve the Maze which they hope will get them released from their prison. 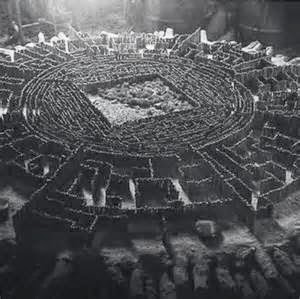 Thomas is determined to become a Runner and help solve the riddle of the Maze.  He feels he was sent here to do just that, though he has no idea why.


The Maze Runner is a great read, just one of those pulse pounding type books that never lets up on surprises and action.
Posted by Librarian D.O.A. at 11:45 AM No comments: Links to this post

I have all of these cards with dual images on them from mom which I thought for a long time were supposed to be people we were related to or something. It turns out they were an entertainment and could be viewed through a stereoscope, presenting a 3D image.

Sort of a very early View Master.  I have a few which tell an odd little story about two little girls. Apparently the entire set of 12 was available from the Co-Operative View Company of St. Paul.  I may not have these in the right sequence.  There are elaborations of the storyline on the back, I've just noted the captions on the front.

The set was titled "Little Runaways in Brownie Land" 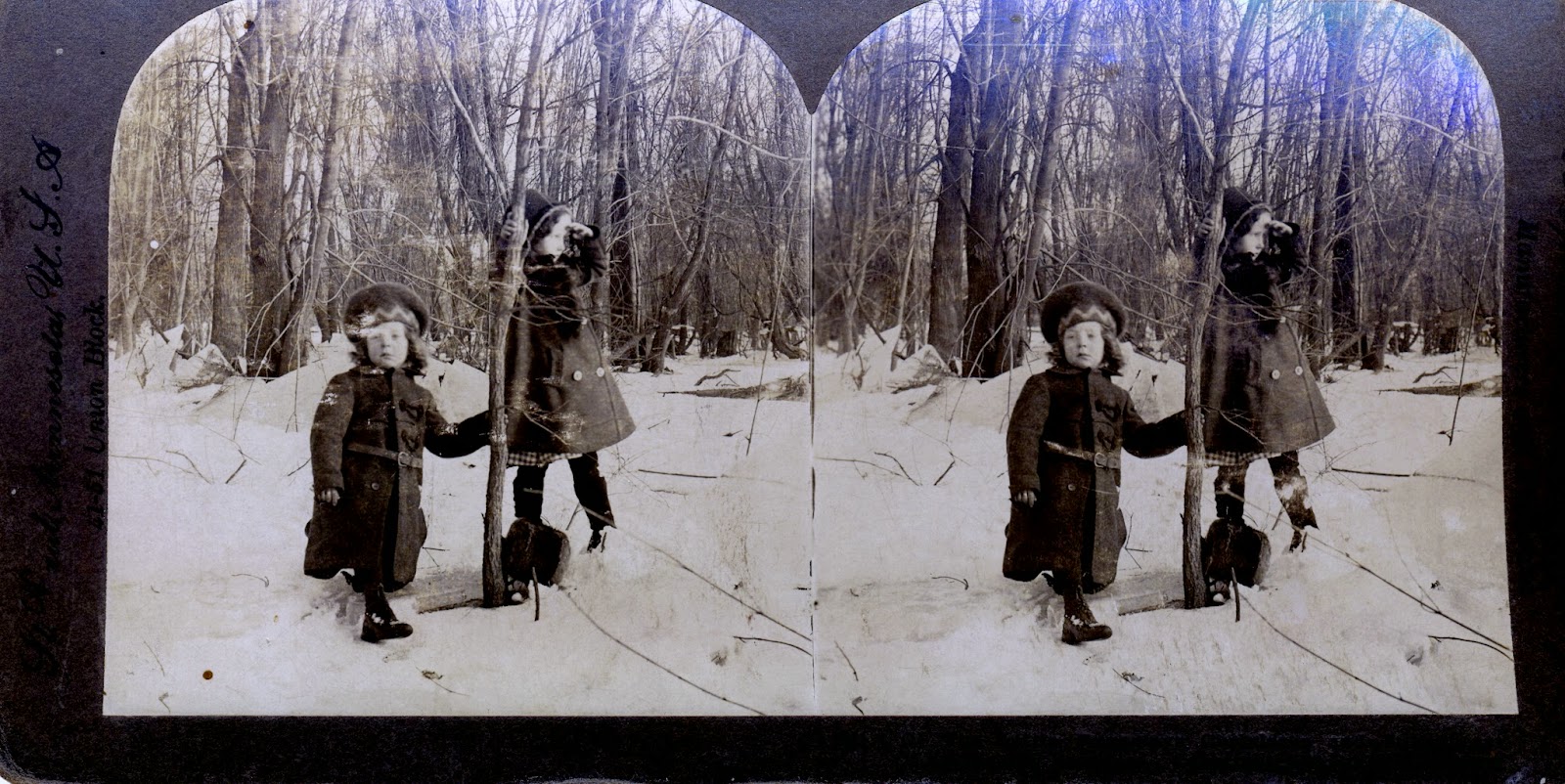 The Sleep of the Innocents--A Dream of the Strange "Kitty" 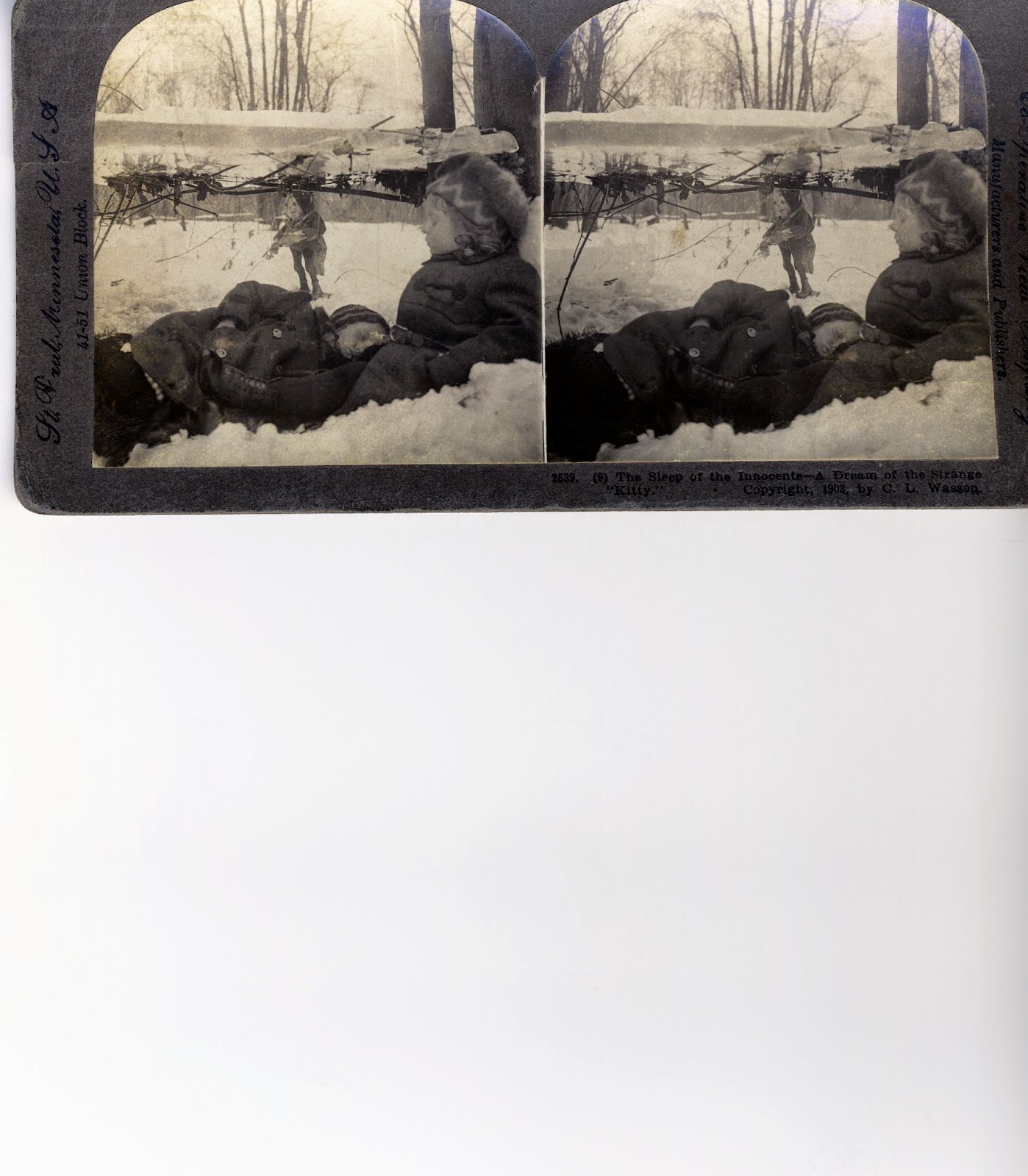 Disappointed and Lonely the Little Guardian Finds Relief in Tears 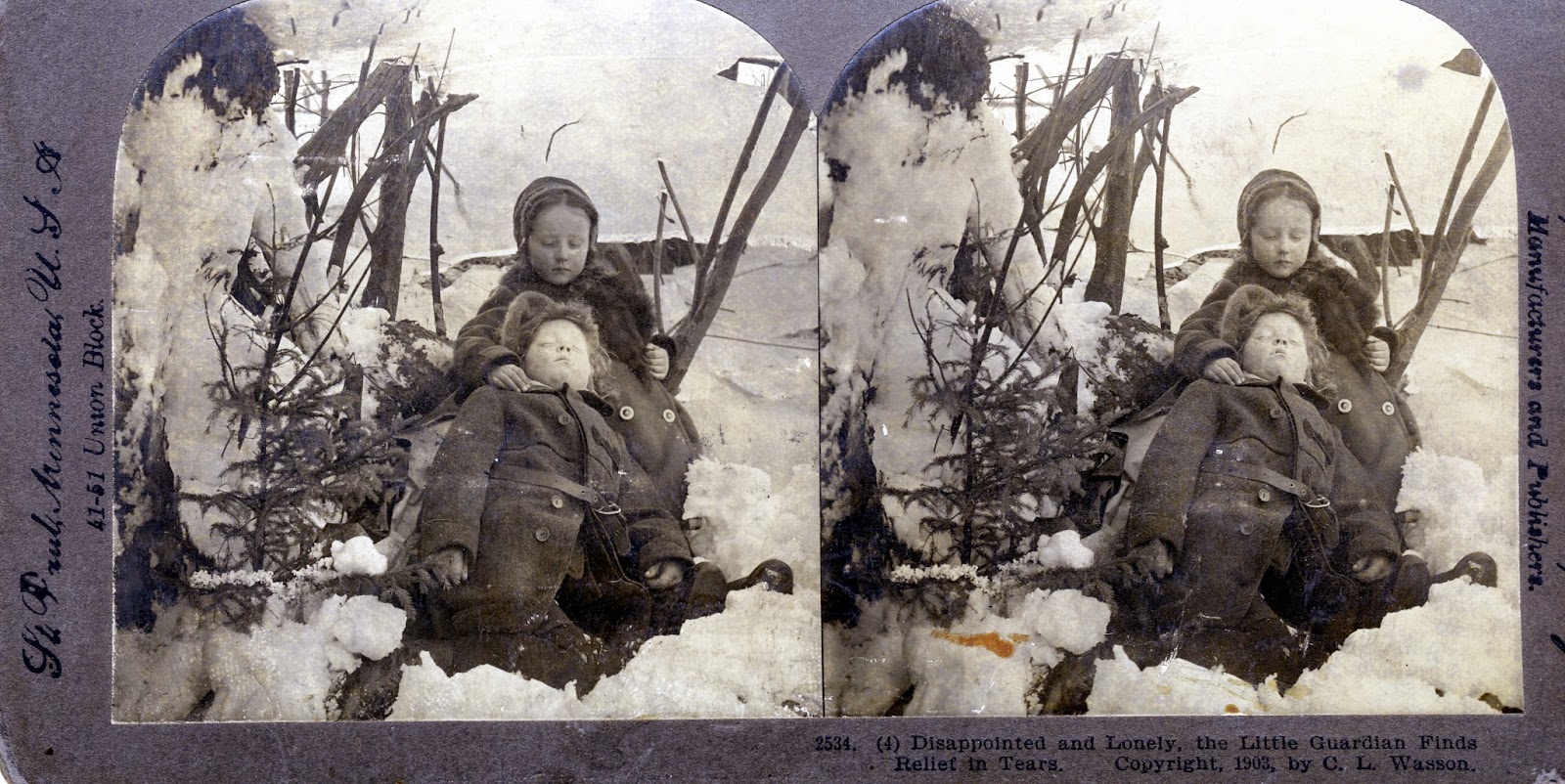 Where the Elves Kept Christmas--Hoping for the Brownies Return 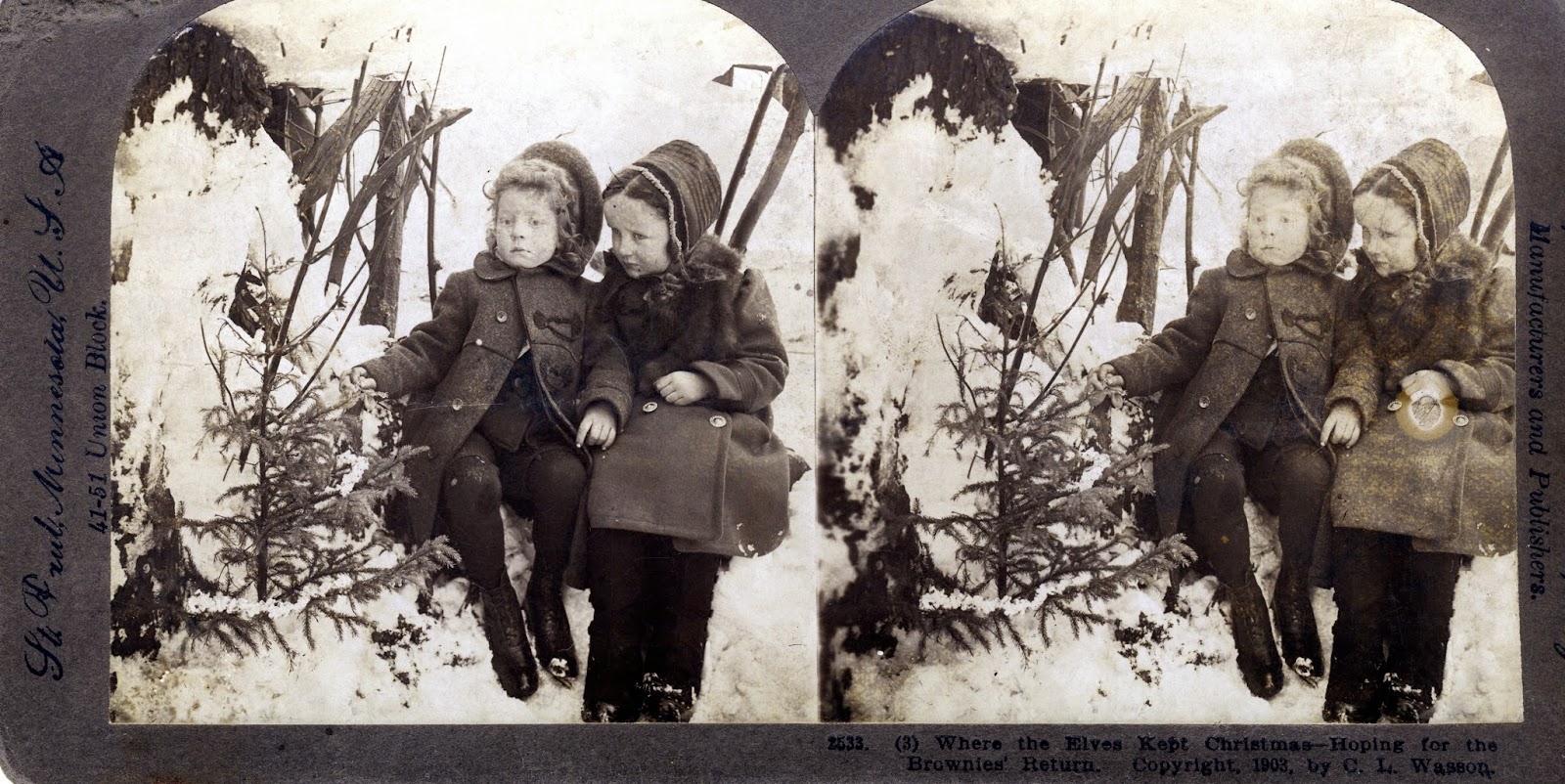 The Rescue of the Runaways--Faithful Fido Fetches Father 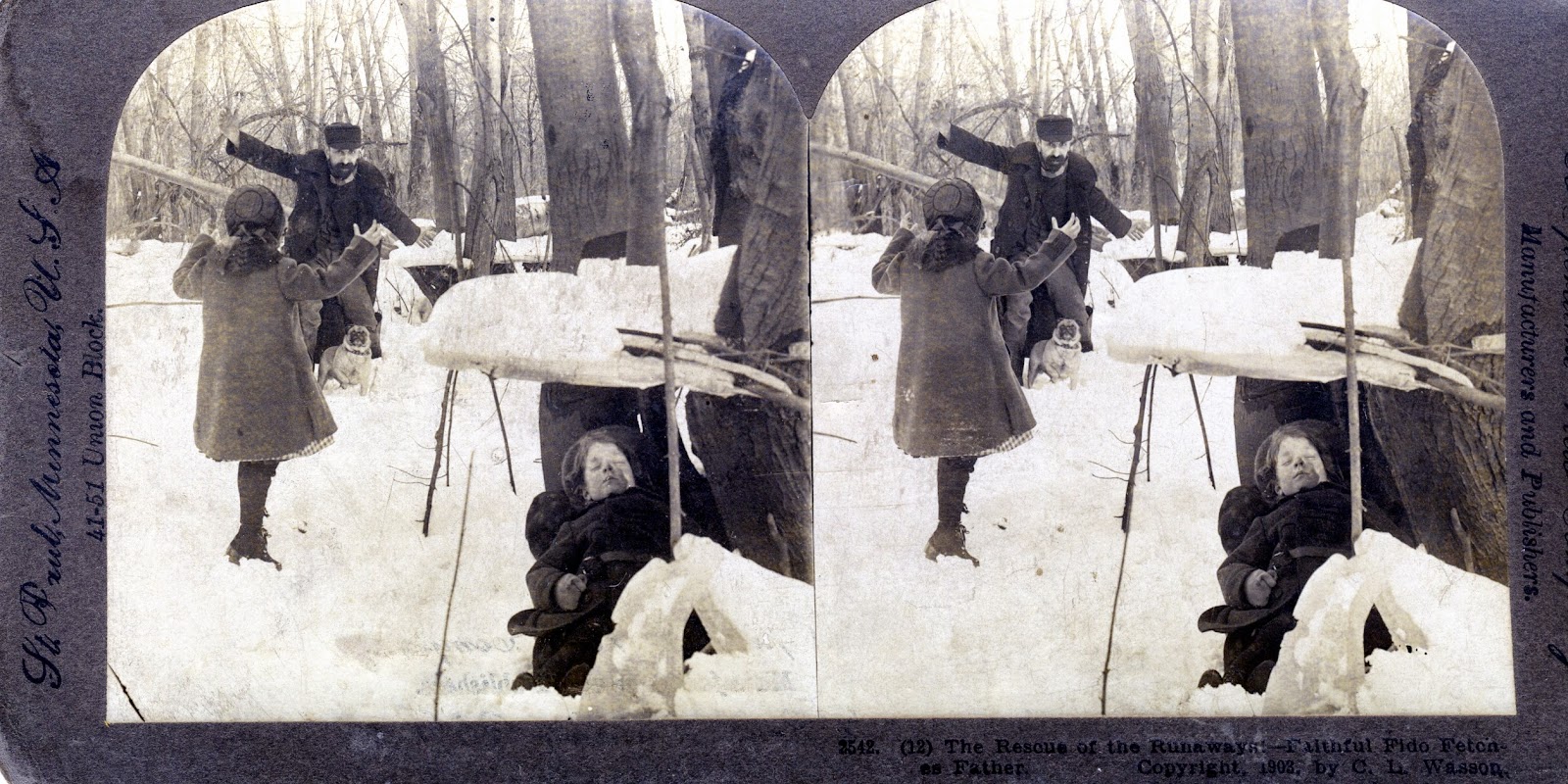 Posted by Librarian D.O.A. at 9:28 PM No comments: Links to this post

Chicon 2012 Strolling With the Stars Collage

I'm having trouble resizing a picture or two so I'm fooling around with online photo editors.  This is a collage from piZap.

We went to Chicon, the World Science Fiction Convention in August 2012.  There was a daily Stroll Among the Stars, where you could walk about a mile or so and talk with your author idols.  It was so cool.

I'm in all of these shots but I may be hard to find with only 6 months worth of hair regrown after chemo.  I had what I refer to as "football head" because that's what it looked like. I was unable to get my hair to part in the middle as it should for love or money. It had this awful, awful part way over on the side.  So look for the woman with not much hair whose head looks like a football. That is me.

Posted by Librarian D.O.A. at 1:43 PM No comments: Links to this post

I'm cleaning up my picture files.  I'm endlessly fascinated by old recipes and I see this among things I've collected.  If I were way cool, I would have made the cake and had a picture to accompany this but nooo, I am a fool.

Posted by Librarian D.O.A. at 1:27 PM No comments: Links to this post

It's time for me to get back to family history work.  I have spent some time at he Minnesota Historical Society looking through old newspapers and I am so easily distracted by ads and recipes and other articles of the day.  The newspaper writing in small town newspapers could be so sensationalist (though this is not).

I hoped I could take pictures from the microfilm with my iPod, but the angle of the reader and the glare from the lights makes the shots I took pretty useless. Still, I am here to share with you anywho.

Little Marvin found a button in his salad.  He remarked, "I suppose it fell off while the salad was dressing."

Posted by Librarian D.O.A. at 11:15 AM No comments: Links to this post 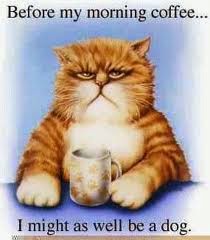 I’m at the bottom of the pile of books that have been waiting by my pc since January! for notes about them to be written up.   I’m putting them upstairs on my shelves after finally getting them noted here.  I have a pile upstairs of course that I didn’t bring down because this is my craft room after all and there isn’t room for much more than my crafts.


I first read Katherine S. White’s book Onward and Upward in the Garden and became fascinated with her friendship through correspondence over many years with southern garden writer Elizabeth Lawrence.


This alternates letters between the two and I honestly wish the editor had just let the letters stand on their own.  I really wanted to read them all, they were that pleasant and full of gardening information.

The personalities of the two women comes out so well.  I really was charmed by Elizabeth, and her generous personality and beautiful writing.  Her knowledge of plants and their growth habits all over the country was astonishing.  She gained this knowledge through yet  more correspondence with farmers and housewives via market bulletins.  She would see plants offered by common local names and write to ask about them to see if she could identify them.


In the second Inspector Rebus novel  the detective finds a junkie dead in a hovel with what looks like signs of satanic worship.  Something nags at Rebus about the scene, and the way some of his fellow detectives handle the body and crime scene. He should let it go but of course he can’t. 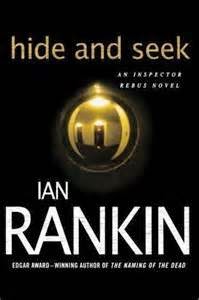 Rebus makes an overture to his estranged brother who is well off and seemingly everything he is not.


The ever lonely Rebus compare his life to his sibling’s throughout, and wonders if he could have been something different.


Heirs of the Body Carola Dunn


Daisy Dalrymple  helps sift through claimants to be the heir to Fairacres, the family estate.  I read this a while ago before I started watching Downton Abbey and it all looks different to me now.  I see a bit better how English law determined who could inherit and who could not.  When I read it I thought Daisy should just get the estate, it was more than unfair to dig these people up to keep her from what should be hers. 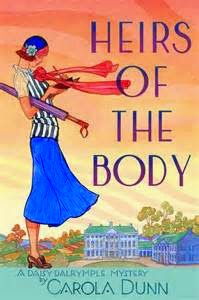 The heirs apparent must prove that they are actual relations.  Since they are scattered far and wide geographically and in their life situations, and their ties seem quite tenuous, it isn’t an easy thing to sort out.


Daisy is very good at reading people and judging their motives so she can be invaluable.

Having all of the heirs who have been located come to Fairacres seems like a good idea until accidents begin to occur.


Her detective husband Alec, who has been reluctant to enter into any family feud situations proves invaluable in sorting things out.

Posted by Librarian D.O.A. at 10:35 AM No comments: Links to this post