After several hours of installation and the most annoying long account sign up package imaginable, I finally tried Star Wars The Old Republic.

I feared I'd never get out of the numerous cutscenes and to actual gameplay, but as you can see I finally made it. Whoa, you say. Yes, I turned all the graphics down to low but eek it is really hard to play with this disturbance in the pictorial force. 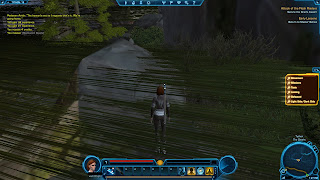 From my short time in game, I will say that it reminds me of Jedi Academy and Knights of the Old Republic as far as how the game plays out.

Also, the first mission has me out looking for some silly padawans who have gotten lost amidst the Flesh Raider Attack but nobody in the station seems the least concerned about these attackers right outside the walls, they're all standing around jabbering as if there is no attack. Sort of immersion spoiling.

I played through to level six last night. Very slow progression. The graphical glitching was horrible in outdoor areas but went away indoors. More caves, please!

Some poor fool invited me to a group (one of those without-a-word in advance ninja invites). Number one, I hadn't run into anything I couldn't handle, number two, it would be unfair to group with someone when the shredded landscape made it impossible at times to seem where I was going or what I was fighting.

Galaxies thoughts: when I entered the Jedi temple and The music that always played on Naboo came up, it brought tears to my eyes, unexpectedly. This game really isn't worthy to be playing that music. I have seen nothing in this game so far that makes me see any reason that they needed to take Galaxies down. Completely different games. No need.

What this game does seem like is a Mass Effect variation in a Star Wars skin.

Something that surprises me is that story has been the buzzword for SWTOR but I am not feeling that there is any sort of a storyline in particular, and as I, look at the world and the npcs, the entire thing seems curiously cold and empty and lifeless. Very much "on a rail".

Interesting to see how it plays out.
Posted by Librarian D.O.A. at 1:39 PM