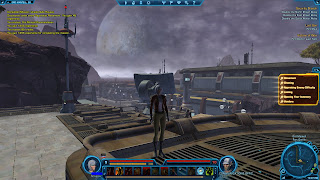 As you can see, the concrete and steel streets of Ord Mantell are much kinder on the eye. I only got the grassy landscape streaks when I went out of the town.

My original choice of classes when I played this game was going to be Smuggler. As only one of two non-Jedi classes, it sounded appealing.

I really like my little shooting smuggler. She drops and rolls behind cover when it is available. She's a quick shot. She's a bit of a smarty without even trying.

They don't let you lean out and shoot from doorways, you just have to plough on in. You're never fighting less than three bad guys at a time, but they go down pretty fast (unless you thought you were leaning out from that door way but you were just getting popped).

I think you can get a better feel for a game if you try each class and go five levels, so onward next to Bounty Hunter or Jedi Consular. Best get the Jedi over with.
Posted by Librarian D.O.A. at 10:10 PM