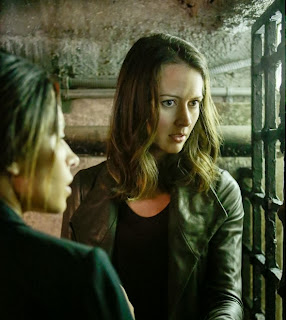 Tonight's episode has the vile and smug Root kidnapping Shaw who is becoming more likeable each episode.  Maybe they are trying to soften the harsh character of Shaw and being roughed up by Root will gain sympathy in a second.

In tandem with that we have Finch working with a guy who roots through dead people's things trying to find relatives who might claim their things and their estates.  The young man is quite appealing and I found myself thinking the team could use someone like him.  No no, too many people already, not enough Reese/Finch time.

I dislike Root so much that when she was in an adjoining cell with the guy she intended to rescue, and she was working off a bit of metal fencing, I just wanted him to move away from the wall because she's sooo creepy I thought she might pierce his neck or head with it.  You can't tell with her.

Satisfyingly that all ties up nicely with Root a prisoner at Finch's place, but not before Shaw gets to punch Root.

An interesting side story with Carter has her trying to use her traitorous rookie cop to bring down HR.  It turns out he is a Russian and the Russian mob is being used by HR to infiltrate NYPD ranks.  Nothing good is ahead for this kid, tsk.
Posted by Librarian D.O.A. at 11:14 PM