Fear the Walking Dead: The Dog

Travis and his family and the Salazars are forced to flee the barbershop when the walls begin melting.  They've been sitting there all this time and nobody in the family has packed anything, no survival supplies.  If there was a mob outside wouldn't you expect the worst and prepare a bit?

There's some nice sniping between Travis and Daniel.  Despite Daniel saying if people break in, they all run, and in different directions, as soon as the door is opened he says "everyone stay together" and they all flee as a group.

Griselda has her foot deeply injured when a big sort of grandstand falls on her.  Everyone runs back to help her and Travis carries her to the nearby truck.  I've read some comments tonight about the truck remaining intact in the riot situation, but that truck is a real piece of junk.  Maybe it wasn't worth the effort.

Plans to drop Griselda off at a nearby hospital fall through when the area is cordoned off by police and shots are fired at patients who won't "stand down".   It does make sense that hospitals would be one of the first settings to get overrun.  It reminds me of the Walking Dead scene where Shane sees hospital staff being shot by military personnel, I suppose they just had no clue how this all spread and figured the people working closely with the sick were all infected.

Poor Paul, a hacking cough one day, really a mess the next day 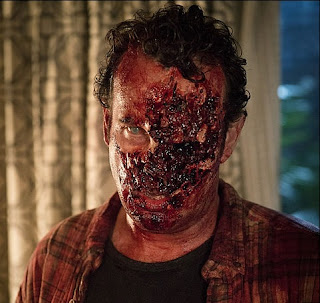 Meanwhile, the Clarks are playing Monopoly by candlelight while they wait.  A strange noise at the patio door turns out to be a dog.  They let him in, covered with blood.  Before they can process this the dog runs to the front door and barks.  There they see a shambler out front.

Nick suggests they go next door and get a gun from their neighbor's house.  The thieving weasel used to go next door for daycare, so he knows they have it.

The neighbors have a bizarre maze in their back yard they make their way through, Nick leading the way, easily plucking a key from under a mat on the porch.

I understand they're totally freaked, but to so easily go break in, and go rooting around, sheesh.  They did call out and didn't get a response.  Lights blink on then off adding to the creepiness.

While Madison and Nick work to load the gun, Alicia spots the shambler going into their open back patio door.   Growls and then a shriek from the dog.

Just then, Travis and company pull into the drive way.  Run run, back through the maze and over the fence hollering all the way. Travis hears nothing through the open back door.  He is treated to seeing his former neighbor bent over the dog, particularly harrowing once the lights come on again fully all of a sudden.

Alicia is sent back by Nick to get the ammo which got left behind.  As she's grabbing it she sees feet under a swinging door, with dark, rotten looking legs.  She runs for it with the zombie neighbor in hot pursuit.  This time, when she's running through and screaming everyone hears her, no problem, and she makes it to safety.

Madison arrives with the gun, but it takes Daniel to take first a glancing shot, then a right up front, head blowing off shot.

Unbelievably Travis and Madison are upset that he did this, though we know he saved everyone by acting decisively.

The Clark family is packed and ready to leave, but Travis talks them into leaving in the morning in one of those defining type moments.  The show isn't The Walking Desert, right, its Walking Dead, L.A. Style.

As they pull out, leaving the Salazars behind (Daniel says a cousin will come pick them up), Madison sees her neighbor's husband returning.  She tries to get to him and stop him from a run in with his zombie wife, but no, Mrs . Zombie is all ready for a big hug.  The spouse is saved by the arrival of National Guard (?) who swarm the place, and the whole neighborhood.

Parting was such sweet sorrow, Patrick and Susan reunited 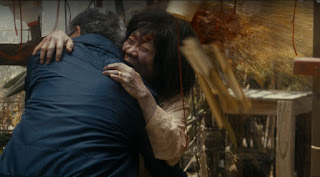 Martial law is in effect as the Guard question the Clarks as to their contact with possible Infected, and house to house searches reveal which homes are clear and which have been infected.

Travis is all happy now that they're here, feeling they're safe now and everything is under control.  Daniel knows better, of course.

Madison  wins the most annoying of the episode, edging out Nick.   Apocalypse Monopoly, great idea.  Prissy insistence Alicia leave the safety of their little snug kitchen group to go put the game away because of house rules....  If she was going to clunk her zombie friend with the hammer she just needed to do it, not have some goofy farewell.   I thought she was a beetch in that little conversation with Liza.  Liza tries to put out an olive branch so they can work together to keep the kids safe, and Ms Stone Cold brushes it off and lets Liza know that Travis will be "broken" if she dies and he has to "put her down".  She just ooozed he's MY Man Now stuff.

Nick , wearing the clothes still that he stole from the old man at the hospital, hasn't showered or put on his own clothing.  All he wants is "moar medicine".  I think he rooted around at the neighbors looking for drugs, and unleashed Susan on Alicia, and there he was scooting around at the end of the episode with a screwdriver trying to break into a barred home for more.  He was terribly offended that some of the schoolhouse break-in drugs were being left behind for Griselda, who was in actual pain.  Wretch.

Alicia may have had zero obnoxious moments this episode.  Big step up.

Liza was great.  She thinks fast on her feet, never whines, is tough, is adaptable.  I am liking her.

Christopher joined Alicia in having almost no bad moments.

Travis  I want him to get along better with Daniel, be nicer to Liza, and not try to talk down zombies.

Daniel  He has a cranky old man thing going, but in a pinch you want him right there by your side.  He is going to ace the apocalypse.

Griselda  As much as she's in pain, she is coasting along, and has faith Daniel will get them through everything coming up, because he's done it all before.  She's not quite right about that of course, but clearly the two of them know how to survive and they'll show their daughter a few things shortly.

Ofelia   Never try to ride out the apocalypse in a pretty dress, girl.  She seems a delicate flower so far.