Doctor Who: The Woman Who Fell To Earth

I knew from the first moments of Jodi Whittaker's appearance on Capaldi's last Who that she would be a great Doctor.

Having watched the first Jodi Whittaker Doctor Who episode twice today, I was right!  She is a great Doctor already.

She has boundless enthusiasm and energy.   The fearlessness to tell any alien to just get OUT.  The quick brilliance.   Centuries of knowledge (after a bit of a reboot process) at her fingertips.   Unassuming bravery.  A love of humanity.  A definitely alien view of the workings of the universe. 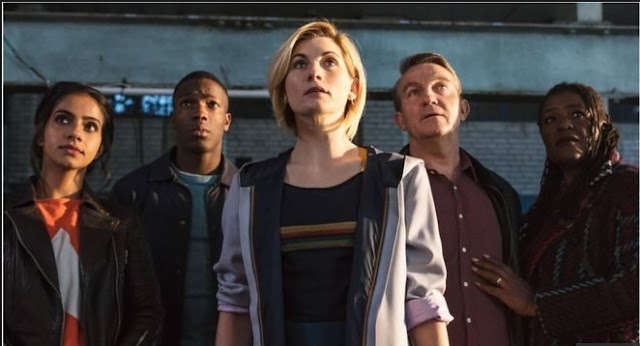 The only thing I was worried about were her companions.  Three seemed too many to start a new doctor off with.   They're perfect, though, and work really well as a team and with the doctor.  I wish Grace could have joined them!  She was the best.

I might have watched all the seasons of Doctor Who from Eccleston to Capaldi within a span of months, rather than over a space of years.  I'd just get to really enjoy a Doctor when a new one would come on board, and I'd be sad to see the one I'd become attached to leaving, but in every case I loved the new Doctor as much as the old.   Each new Doctor seems to become my favorite.  I think that will be the case here as well.

The Doctor's surprising entrance through the roof of a train and her quick dispatch of a tentacled alien.

The Doctor making her own new Sonic Screwdriver. 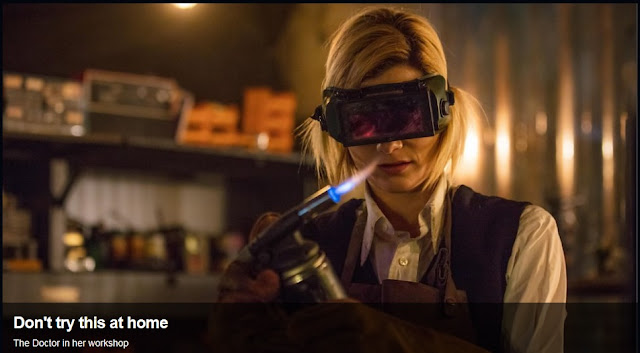 Graham's surprisingly touching eulogy.  The show doesn't often allow emotional heft in any scenes, but his speech, and the glory of Grace's great character made it special.

Off to find the Tardis, oops!
Posted by Librariandoa at 9:47 PM

Labels: Doctor Who, Doctor Who Companions, The Woman Who Fell To Earth