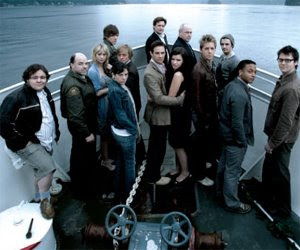 I've seen the promos for this limited mystery series while watching Survivor (It runs now through July). As a fan of whodunits, I was intrigued. This isn't your momma's whodunit, it is a bit too Beverly Hills 90210 drama queen, a bit too Halloween/Friday the Thirteenth.

Even so! My suspects for who is the KILLER are:

1. Thomas Wellington Father of the bride, hater of the groom, big fan of the bride-to-be's former boyfriend sweetly named "Hunter". We can't say why, at this point, but he was unconcerned enough about "Propeller Magnet" cousin Ben to have arranged his demise and good old "Uncle Marty" certainly met a grisly death after confronting Thomas on his nephew's behalf. Did you hear those crunching noises? See that frayed torso? Yikes. How do you do something like that? Wasn't a chain saw unless they come with Silencers nowadays.

2. Sheriff Charlie Mills Abby's dear old dad. Could have killed his wife then the rest to cover it up and placed the blame on the "murderer" he conveniently shot in self defense 7 years ago.

3. Jimmy Mance (Think this is the right guy) Abby's old fisherman boyfriend. Seems too nice, might be a psycho-up-the-sleeve type.

4. Vague possibility it is some supernatural ghostie/ghoulie, especially since the little girl "Madison" (she was the one torturing the snail with a magnifying glass) has a new "friend", unseen thus far.

Those are my best guesses for now.

Read all about it!