So Lost: The Variable 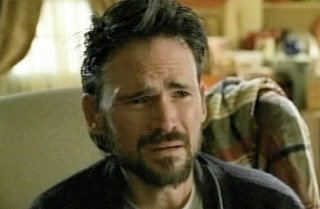 A variable is a value that can change, depending on conditions or on information passed to the program. (Daniel)

The opposite of a variable is a constant. Constants are values that never change. Because of their inflexibility, constants are used less often than variables in programming. (Desmond)

Here is another episode that is full of revelations and questions. Although Daniel states "we are the variables" meaning all of the Losties, it appears given his mother's lifelong manipulation of him and his life and fate that he is at least the Key Variable. And his father! Ha! I knew Widmore was his father, I just knew it!

1. Is Daniel really dead or going to die? Jack is a few feet away. Daniel has the book in his shirt, but since he was shot from behind by his furry blue mommy (Sesame Street reference) that probably won't save him like the old book under the shirt does in the movies. Also, Richard who just saved Ben at the Temple can take Daniel there, right?

2. If he is dead, did Widmore send Miles to the Island specifically to talk to Daniel as a dead man and get the information about the bomb and how to blow things up and thus change time, thwarting Eloise?

3. Since future Daniel spent three years at Dharma headquarters, did he sort of infiltrate them and plant the seeds for the Ilanna-led group to go to the island and blow things up in case he was unsuccessful himself?