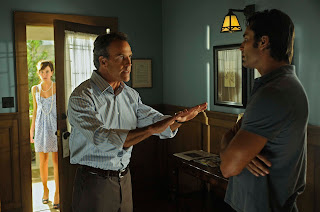 I think they cheated a bit here having one of the Victims of the Week be a non-wedding wedding party member. The poor Reverend *sniff*, all he wanted was a nice scone and a little walk in the woods. I wish I could say he was accidental and that the trap was intended for a party member, or that the Killer was just testing the traps, but the fact that Cal didn't get killed belies that possibility.

On the other hand Cal is obviously not the Killer since he was tied up for the bulk of the episode. One suspect off the list.

I guess we have to take the groom off the suspect list too since he had all that deer cleanup to do. The killer really does seem to like to taunt his victims and create an atmosphere of fear so he may be a garden variety ghost who Feeds on Fear.

Did you note all those candles on Wakefield's grave? Somebody has been keeping vigil and perhaps trying to raise his spirit or some such. Always a bad idea.

Maybe because I've been watching the Harper's Globe clips, I am now suspecting Jimmy Mance (the old flame) and Shane Pierce (the townie) of being two of the guys in the "Dangerous Wreck" uploads.

Edit: it came to me as I was vacuuming that the 3rd guy in the Dangerous Wreck clips is Brent, unless he shows up dead shortly. Obviously some Secret Society/Brotherhood deal going on on Harper's Island. Hmm there ya go, they brought ol' John Wakefield to the Island years ago to dispatch people in some good ol' boy sacrifice to the gods dealie, now they're feeding the beastie again with our wedding party. Absolutely brilliant theory, is it not?

Jimmy (the old Flame)is also seeming more sinister as he talks to Henry Dunn (The Groom) and to Abby Mills (the good girl).

The dad still seems a good possibility, note that hard, calculating face as he comforts his daughter over the "surprise" appearance of old boyfriend "Hunter".

Speaking of Hunter (the Other Man), I don't buy his guilt in that last flamey death of the the dog lady, just because he was standing all mopey looking down at the festive bonfire. Nah. Red herring city.
Posted by Librarian D.O.A. at 6:46 AM