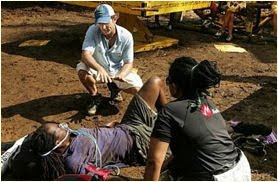 I'm a little behind on Survivor Samoa.

I was sad to see fellow Minnesotan Ashley Trainer go home two weeks ago. She just couldn't withstand the bad luck of Foa Foa and the machinations of Oily Russell.

Last week was a shocker with Lawful Russell, Galu leader falling to his knees and passing out at the challenge. He had such a good attitude but the dehydration and starvation that goes with the game did him in, almost permanently. It was really scary seeing his eyes rolling back in his head as the medical team tried to revive him.

From the CBS site, here's that last challenge and some video highlights they they call The Best of Russell.

Check out Survivor Fever for interviews with Russell and Ashley and the other castaways of season 19.
Posted by Librarian D.O.A. at 5:34 AM