Hillbilly Ben got tossed last night through the efforts of Jaisson, a truly elegant and gracious man who just would not put up with the vile piggish Ben any longer. It was painful to see the Foa Foa side floundering under the influence of two completely awful human beings, Ben and Oily Russell. I never root for the villain, I don't find them to be entertaining, and I always want to see them get tossed as soon as possible.

The Galou side, which has won every challenge so far, is not getting any coverage at all, so we don't even know those people. All we can see so far is that the women think they're at a spa, and Lawful Russell, the Galou leader, has some bizarre need to further pamper them.

Shambo, who has been very likeable up to this episode, was sent to the other tribe as a spy (they've done away with Exile Island) and she sort of caved in and gushed that the Foa Foa people were so nice(!!!!!!)unlike her own yoga/zen/slacker/Beverly Hills 90210 tribe. She really needed to treat her own people the same way she approached the Foa Foas, age difference or not, so that she did not make herself an outsider. It really was her own doing, she didn't like the they operated right off and she needed to handle that another way. Tsk. 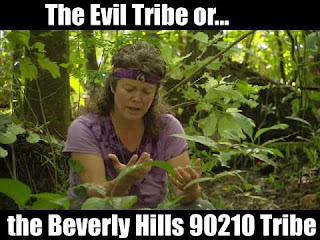 I thought it was very interesting that they showed her greeting and interacting with every Foa Foa except Oily Russell. What did she say to him, and how did he react?

In the previews for next week they show Oily Russell talking with Jaisson and they make it look like Jaisson is suddenly all weary of the game and ready to give up, and Oily Russell is ready to give him the boot, of course because Jaisson forced Oily to vote against Ben, not in The Plan, at all. Maybe Oily gets nailed next week and that is why they show him so much. Bleh.
Posted by Librarian D.O.A. at 10:24 AM