Death and Taxes @ the Library

Tax Season has arrived! Customers have been clamoring for 2009 Tax Year forms since at least October, even though you can't file until January. They must have money coming back or something, because otherwise they'd be part of that humongous group that comes in desperately on April 15th looking for forms and tax help (yipes).

Here's the skinny for the uninitiated:

Libraries could order Tax Forms from the Feds in August 2009. The forms did not begin arriving until November, and they did not all arrive at once, they are trickling in. Most federal forms, including those we don't have because they're not available for library distribution are available online at: 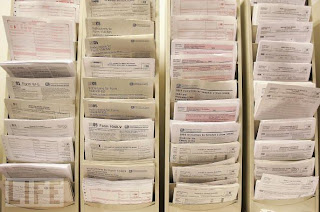 For the wildly excited State of Minnesota tax form fans (and they are legion this year) we were not allowed to order forms until December 21st. The state said the forms would be available the "first week of January 2010" but its Thursday and I've seen nada.

Long time State Form fans will know that the state is notoriously late trickling out forms (they don't send them in a single shipment, noooo).

While the Federal government makes a wide variety of forms available to libraries for distribution, the State of Minnesota seems to offer fewer forms this way every year. I think there are only ten or so that they let us request. If you're waiting to do your state taxes, you're far better off going directly to their site, where all forms are available to download:

Libraries can't offer tax assistance, we just stock the forms. In many cases the AARP has tax aide volunteers out in the community. Their site will list tax aide locations in late January.

For low income Minnesota residents there is a program of volunteer tax aides called VITA from AccountAbility Minnesota: