Shades of the Blair Witch films!  A college age camera crew is out in the woods having a hoot filming footage of themselves at night looking for Big Foot.  One of the guys demonstrates his patented Big Foot howl and almost immediately he is struck down by something.  The camera rolls and careens as the others are attacked and tossed against trees. 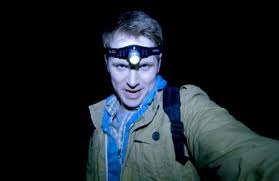 Juliette gets an emergency call from a stable owner whose horse has been attacked by something.  The owner got off a shot at the attacking creature but he isn't sure if he hit anything.  Juliette examines the horse who has large rakes across his neck as if a creature has clawed it but the claw marks are huge.  They follow giant footsteps into the woods which disappear suddenly.

What appears to be a shoe randomly tossed into the pathway still has the bloody foot inside.  They look up and see the carnage created earlier by the beast.

Enter Nick and Hank and Wu at the crime scene.  They find the camera and send it to be analyzed.  Suddenly a girl runs out of the shrubbery yelling about Big Foot attacking them all.

The girl is sent to the hospital and the police review the film of the night before.  It seems the creature wore a flannel shirt so the captain says this is our crime and we will quell any talk about Big Foot to keep hysteria down.  Unfortunately the girl is babbling about the attack at the hospital so the Big Foot rumor spreads.

Our Blutbad About Town Monroe is snoozing away at home when he smells an intruder.  Sneaking downstairs ready to fight, he encounters the Big Foot creature in his kitchen who he recognizes as Larry from his circle of friends who are trying to quell their inner beasties.  Larry is unable to turn back into his human form and he is injured and in need of help.  Naturally Monroe calls Nick.

As they discuss what to do, the police hounds have chased Larry's scent to Monroe's neighborhood.  I've marked the area well, says Monroe proudly, that will throw them off.  Not well enough, because onward they come.  Bad news if Nick, Monroe and Big Foot are all casually sitting around the living room when Hank and the dogs arrive.  Monroe grabs Larry's red flannel shirt, goes Blutbad, and leads the dogs on a chase off into the woods.  After a distance, Monroe turns, roars at the dogs and they run away like scared pups.  Hank is knocked down by Monroe who rushes by.  Hank gets only a blurry look at the creature and the red flannel shirt.  Monroe gets home and Larry painfully rips something bloody out of the back of his neck and dies.  Nick and Monroe have another body to dispose of.  Good thing they use rubber gloves! 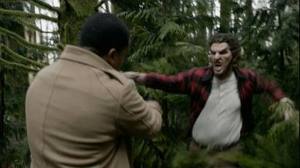 Monroe goes to his pool hall hangout where the guys usually meet to find that Larry had been seeing a wesen doctor who claims to be able to help with the inner beast.  The touchy-feely doc feels the beast should be embraced.  At least that's what he tells his swooning fans.  In reality, he has inserted a device in the necks of several wesen which releases a variety of herbs and other substances which should help control the beasts.  Instead, they become stuck like poor Larry between forms and go mad.

Of four devices sold to the doc, three result in deaths.  The doc has inserted the fourth in his own body and he loses control just as Monroe comes to his office to confront him.  Nick and Hank arrive at the scene just in time to save Monroe but the doc escapes.  I liked Hank's "what is he doing here?"  I suppose he is still embarrassed that Monroe witnessed the odd Hank behavior under Adalind's spell.

Anywho, the doc goes to a theater, ravages his way through a crowd, drags an unconscious woman off through the seats chased by Nick and Hank and Wu.  He of course falls to his death in the chase.  Hank arrives first and sees the metamorphosis.  Hank is shocked at what he sees and Nick pretends he did not see anything unusual. 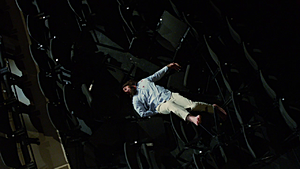 Once again, the only thing carrying the show mythology forward is Juliette, who took hairs from the stable crime scene and analyzed them.  I thought her appraisal that the DNA had chimera qualities was quite a leap from her hominid/primate notations.   "Chimera" is a broad term and is often applied to many different mechanisms of the mixing of cells from two different species.   Nonetheless the show might have been just a monster of the week segment without the last lines of the show, with Juliette asking Nick "What if all of those stories we've heard through our lives aren't really stories? What if they're real?"