The Man Who Came To Dinner

My nephew was in the play version of The Man Who Came To Dinner tonight.  I love old films from the 30s and 40s and the play was in that era.  I thought I had seen the film sometime in the past, but after seeing the trailer for the film, I realize I had not.  My mom talked about the film so much that I thought I knew it.

It's so icy out tonight that the theme of the play, a man coming to dinner and slipping on ice and making a resident pest of himself for six months seemed appropriate. 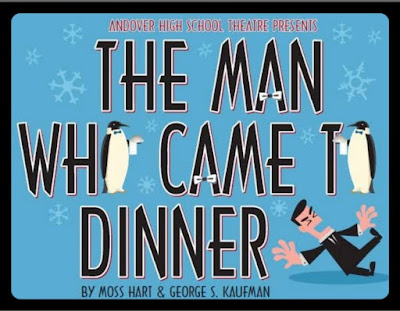 There were so many bizarre characters in the play, and each was brought crazily to life by the actors.   I felt sorry for everyone who came into contact with "Sherry" Whiteside, a man given to insults and blustering.

There's a little clip from the film version  http://www.tcm.com/watchtcm/movie/82721 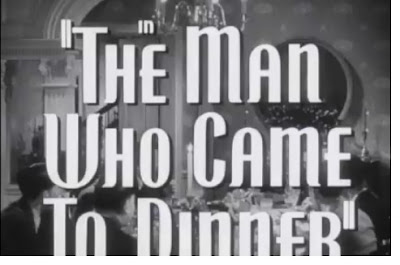 It is so funny to hear the actors from long ago saying the same lines I just saw on stage.  I wonder if the play classifies as "screwball comedy"?

Screwball comedy is principally a genre of comedy film that became popular during the Great Depression, originating in the early 1930s and thriving until the early 1940s. Many secondary characteristics of this genre are similar to film noir, but it distinguishes itself for being characterized by a female that dominates the relationship with the male central character, whose masculinity is challenged.[1] The two engage in a humorous battle of the sexes, which was a new theme for Hollywood and audiences at the time.[2] Other elements are fast-paced repartee, farcical situations, escapist themes, and plot lines involving courtship and marriage.[2] Screwball comedies often depict social classes in conflict, as in It Happened One Night (1934) and My Man Godfrey (1936).[2] Some comic plays are also described as screwball comedies.

I think fast paced repartee and farcical situations are right on the money for this one.
Posted by Librarian D.O.A. at 11:21 PM