Next spring production is to begin on the first film set in the world of the Mortal Engines.

In the far future, cities such as London are mobile, roaming a Europe depleted of resources looking for smaller cities to absorb.  London has a larger prize in mind: beyond an immense wall is an area without hungry cities on wheels, and there are resources to be had if a way can be found through the wall.

Two teens, Tom Natsworthy and Hester Shaw, find themselves fleeing dark forces from the city of London, while within the city, Katherine and Bevis try to find and destroy a weapon called Medusa.  Mortal Engines has everything you'd want in a science fiction adventure: fantastic science, a truly strange society on wheels, chases, romance and a world gone mad.

Author Philip Reeve has a blog post on the Mortal Engine books and what order to read them in.  There are four in the series and it sounds like there are plans to film the entire series.  Unimaginably exciting! 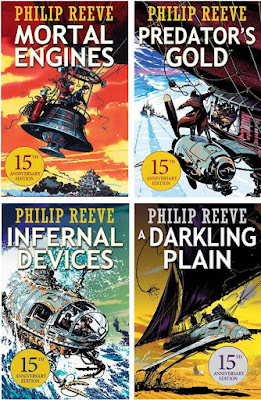 More about the film: