Return of the Cryptogram! 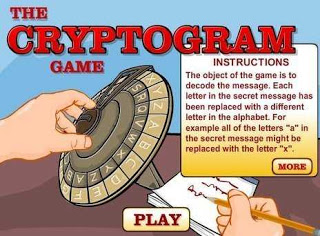 I've done these in the past, picking a first line from a book and using the Brain Food Cryptogram Maker to create the puzzle/coded sentence.

To get started, write out the alphabet on a piece of paper and look for recurring letters in the sentence below, then make educated guesses as to what the words might be. Then ponder what makes sense in an English sentence to help get the rest of the words.

The answer will be posted next Tuesday November 22.  Good luck!


Note:  I'm halfway to posting once a day for National Blog Posting Month.  I've only been successful once, I think.  Once year I tried to keep three blogs that I was writing up with a post a day.  Ha ha, no chance!
Posted by Librarian D.O.A. at 10:31 PM