A day late!  Thanksgiving week isn't the best for posting.  You're getting this instead of WIP Wednesday, which will finish out the month next week with a mind boggling array of unfinished works in progress. 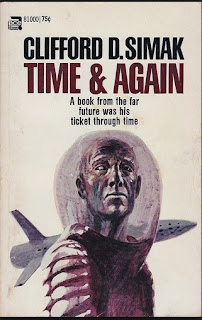 From the book Time & Again by Clifford D. Simak:

The man came out of the twilight when the greenish yellow of the sun's last light still lingered in the west.


I have the book in hand and meant to re-read it before this week's answer.  I read all of Simak's books once I discovered him sometime in the 80s.  There is this wonderful, gentle humanity to his writing.  And he was from Minnesota!  In another life I could have met him and told him how I loved his books.

From the back cover:

What would you think if you found an old book signed with your name--and learned it bore a date in the distant future?  It happened to Asher Sutton, and when he set out to investigate the incredible enigma, he found that book a passport and ticket to a galactic empire many thousands of years from now.

His story, his adventure, and the book he couldn't have written but somehow did, are but facets of this most unusual, gripping and cosmic of science-fiction epics.  It is a novel of robots, androids, alien intelligences, and a cosmic corporation designed to last a million years.
Posted by Librarian D.O.A. at 6:04 PM