In this weeks's episode, a wesen freedom fighter is on the run from several determined assassins.  He ends up in Portland, just ahead of a particularly tough pursuer who manages to wound him before he escapes to Rosalee's shop.

He is looking for Rosalee's dead brother who was known to help fleeing wesen get to safety.  This is a bit of a nicer background for Freddy who seemed to be largely a dealer in illegal wesen substances from previous episodes, particularly Island of Dreams.

Nick and Hank investigate the bus station shooting, getting helpful information about the fugitive Ian Harmon from the bus driver.  He also has Ian's picture to offer.

The deadly assassin is Edgar Waltz a member of an organization of Enforcers called the Verrat.  Edgar joins many recent members of the creature community in threatening Captain Renard.  He wants Renards cooperation, he wants Renard's pet Grimm.   He tells Renard "If you seek peace, prepare for war". 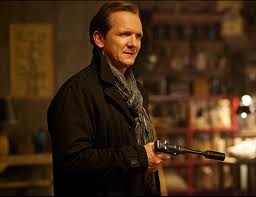 This made me wonder if Renard is not off in this corner of the world so that he can lead a peaceful and honorable existence.  Remember when he was affected by the coins?  He may have dreamed of rapturous crowds shouting his name, but when awake what he most wanted to do was go more forcefully after the criminals of the city and make it safe.

Ian Harmon, saved from his wounds by Rosalee and Monroe carefully digging out the bullet, asks again for help getting out of town.  Monroe insists that Nick be brought in to help with the situation, and Rosalee vouches for him as well.

Nick, fooled by Edgar into thinking Ian is the killer, pulls his gun on Ian and has to be talked down by his friends.  Ian gives him some interesting information.  There is a war coming. There are seven royal houses which rule the world and they are in upheaval because of the Resistance and Grimms are involved with them in ways they should not be.  The Verrat is trying to wipe out the resistance, particularly its leader Ian.

Nick was very impatient and didn't want to hear a "history lesson" from Ian.  Yet, in an earlier part of the episode Nick sat in Aunt Marie's trailer making his first entries in a Grimm notebook.  He was recounting his tale of the Klaustreich (nasty cat creature) and his wife the Seltenvogel (bird creature with a golden egg growing in her throat).  He had a drawing of the Klaustreich and was penning a description of the cat man.  He wanted to call him an ass, but settled for "treacherous", laughing, no no I can't say that.  The point being, he is really embracing his Grimmness and I would think he would want to know everything he can learn. 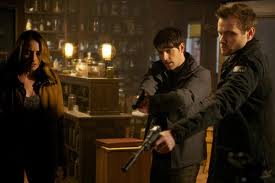 Nick was also shown watching a film on that curious hand cranked projector of some simple wesen creatures being shot down by the assassin creatures from the Verrat.

I suppose Nick was just torn between his duty as a policeman and his loyalties to his friends and allies Monroe and Rosalee.  In the end, he helps Ian leave town, telling him never to return (as if that could stop the upcoming creature war).  He tells Monroe to dispose of Edgar's body (shot by Ian in some pretty cold blood).

Good episode, I'm enjoying the mythology they are finally adding into the episodes.  I wish they had spread it out more over the course of the season but I'll take it.  Four more episodes.

I want to know what type of creature Renard is and I want Nick to know him for what he is.

Juliette can be revealed to be some interesting creature as well, or maybe some rare and wonderful Creature Doctor.  Why not, not much of a stretch from veterinarian to wesen meister.  Or maybe she can just play veterinarian to the wesen.

I would like Adalind to approach Hank and try to create a real relationship with him .  Perhaps aid the Grimm side with some of her knowledge, but secretly via Hank. Suitably complex.