I'm pleased with this new edition of Survivor. For at least the last two, every person has been horrible, dislikeable and it has been hard to pick anyone to root for in such a morass of badness.

Now we have only a few immediately villainous types, and they aren't even all that bad.  Actually, looking at the cast and having seen the episode, only Angie seems like a complete witch.  Not a bad start.   RC the "banker" who wants to hide being a banker also is a bit of a hag.

I'm not a fan of the "returning players" concept.  They are pretty much cannon fodder right off as having already had their shot etc.  Of the three this time, I came in after Australia season player Michael Skupin was injured so I don't know him.  He seems really nice if bumbling.  I like Russell Swan too, and appreciate his efforts to keep himself cool though he can't seem to resist taking over.  Chopping block city.  I was never a fan of Jonathan Penner, a rather oily sort.

The two "famous" people seeking to hide out among the castaways aren't doing so well at it, both have been recognized by at least one other cast member.

I like the splitting of the tribes into three, which eliminates another problem of late:  One side always wins and just chops down the weaker tribe and voila, by episode three they have to merge or mix up to try to prevent one side just going kablooie. 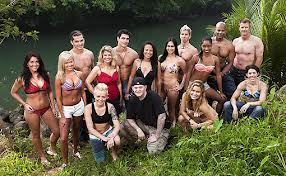