This week a tight alliance of Nick, Hank and Monroe take on the case of a Reverend who comes in to report that his volunteer accountant has stolen all of the church funds and has gone missing.

When Nick and Hank go to the accountant's workplace to question folks, they find that the company wood chopping/grinding apparatus is clogged by a body with a metal hip which has caused the machinery to stop.

The investigation is now a homicide and our duo go to question the good reverend to see what he knows.   Catching him in a meeting with his church elders, Nick says Norm was killed and was likely set up by someone else as the thief.  In one of those Grimm only moments, everyone reveals their shock at this news by transforming--the Reverend into a Blutbad and the congregation into Seelengut, rather adorably rendered sheep-like creatures. 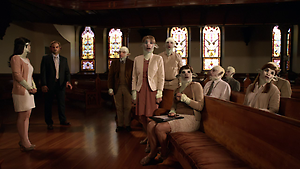 Enter Monroe, Undercover Blutbad.  He enters the church one evening dressed in shoddy clothes and hat, his eyes glowing Blutbad red.   The flock of Seelengut are shocked and frightened by him but the reverend hears Monroe's tale of wanting redemption and help and offers him lodging for the night.

The Right Reverend is of course ye wolf in wolves clothing.  He has bilked a congregation before with the help of his "assistant", as Nick and Hank see when they investigate.  He is also among his flock in other ways, getting a young girl pregnant, which inflames his sheepish assistant.

Monroe's dislike of herd mentalities is right on the money.  Our lovely assistant turns the flock against the reverend and they attack him and kill him for his crimes.  Just as they are about to do in Monroe as well, Nick and Hank intervene.

The flock all take responsibility for the murder of the reverend, so no loose ends there.  His lovely assistant and the pregnant girl are off to the beach to enjoy the money from years of scams.   The sheep shall inherit the beach?

Juliette goes out with friends who tell her Nick asked her to marry him and she said no, nobody knows why.  She has a conversation with Nick and they both decide nobody needs to move out just yet despite the uncomfortable tensions between them.  I have liked Juliette since the beginning and think she is smart and has great research and logic skills even though her heart is currently forcibly in the wrong place.  There was a small scene with Renard recalling the kiss that saved her.  I do hope she does not have some tie to him that will get in the way of her relationship with Nick.  If the kiss merely ties them to each other in some way that would make them prone to loyalty to each other in the future, that is an ok plot twist. 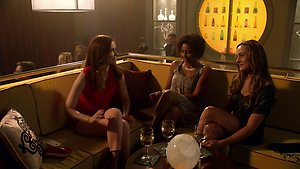 Hank is really growing into his role as Grimm cohort.  He soaks up new knowledge and bluffs his way when he isn't quite sure.  I think if there is this upcoming war, Hank is a great person to have Nick's back.

The Nuckelavee creature that was sent by Renard's "family" to get the key shows up at Nick's trailer and I'm all panicky thinking oh no, he knows where the trailer is, Nick is going to have to move the trailer.  Oh no, Nick has got to kill him and chop off his head, eek.

Instead, a rather tame fight ensues and of all the weapons in the trailer's arsenal to pull out of the cabinet, Nick pulls out a mallet, pummels the guy and that's it.  I didn't even realize the guy was dead till they casually commented to Renard at the end that this guy had been found near the river, pummeled.  I just think he seemed like an extra creepy and potentially powerful enemy and he was dispatched a bit too easily.