Last week another show that was inexplicably plucked from the air just when it was set to return from "fall hiatus" returned:  the ever entertaining Grimm.

Nick knew who was fooling with Juliette thanks to Monroe (who saw the Captain and Juliette smooching).  He had the BEST killer looks for the Captain as they investigated a crime scene Nick and Monroe had created themselves.  He looked the smallest inch from launching himself openly at the Captain.  The Captain did not miss seeing this but somehow seemed to be able to act as if he didn't notice.  Cool customer. 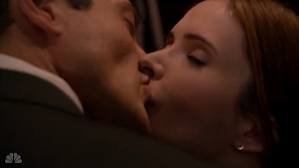 Rosalee has thankfully returned and with the help of Nick and Monroe she poured over tomes in her spice shop until she found something that could help Nick, Juliette and the Captain.  Something dire, of course! 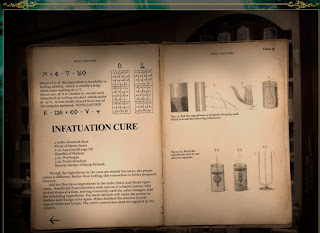 The previews we saw of Juliette and the Captain going to town turned out to be a bit different in the episode.  The Captain and Juliette were drawn to each other but in a hateful violent way that neither could control and both loathed.

Meanwhile, Adalind was released from jail so the Captain could interrogate her freely.  Slinky former witch that she is, she talked Renard into doing the nasty with her to help satisfy his itch, and she insisted he do it in full hexenbeist mode.

The Captain is only half hexenbeist so when he is transformed, only a portion of his face gets all zombie looking.  A bit disconcerting when we're used to all of those full blown transformations.

The best transformation in this episode was when  Renard used a wesen locksmith who could turn into an owl creature whose head fit in the lock of Aunt Marie's Trailer.  Once he was in there, he could see exactly which key on his gigantic keychain would fit the lock. 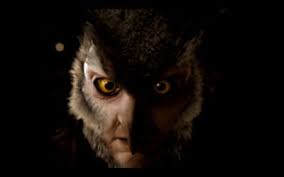 Nobody wants Nicks trailer to be pawed through by everyone that stops by.  Why isn't Nick moving that trailer elsewhere?

The Captain searches the trailer in wonder at the many tomes and weapons without finding the map key he needs.  Suddenly he pictures Nick furtively putting something in his desk at the precinct and voila, he goes there, openly rifles through and the key is his.

He cleverly stamps the map onto a piece of paper and puts that in his own desk file.  He doesn't need the key, just the map.  You will recall this map leads to a weapon of incredible power, which is why everyone wants it.

I had been thinking Nick gave it to his mom, but that was the coins of power lust...

Renard, having been threatened by Adalind (despite the nookie) that she will expose him to Nick, decides to take matters in his own hands.  He meets Nick, gets thrashed by Nick, gives Nick the key.  Tidy.

Before fadeout we see Adalind all smug in Austria with a positive pregnancy test.  Yes, apparently one dance with the captain in his hexenbeist form was enough to get a mini-hexenbeist started.  A witch would have this knowledge and you can take Adalind's powers away, but she is still the Witch of Witches. 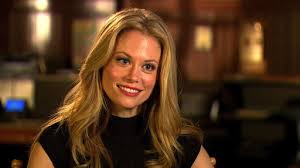 My thought is, she want the leverage of  having Renard's child, and who knows, maybe bearing a hexenbeist produced by a hexenbeist will bring her powers back.  Maybe she eats the poor nipper or something to regain her powers.  Ewww, but not something she wouldn't do.  Bets are on that hexenbabies develop faster than the 9 months it takes for humans as a plot device.
Posted by Librarian D.O.A. at 9:14 AM