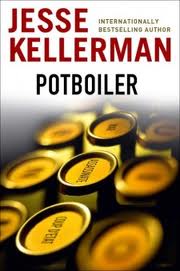 This is another of the nominees for the Edgar for best novel.  I had a hard time with this one.  Here is a description of the main character that is dead on:

"We have a profile on you running back to the seventies.  You were emotionally needy, financially strapped, alternatively self-congratulatory and self-loathing, led to believe that your more successful friend held you to be the superior writer.  It was the perfect storm of ego and greed."   Potboiler
p 154.

My own notes said "Protagonist Pfefferkorn = prig.  Unappealing, self-absorbed.  Talentless literary snob."   It was torture to follow this character through 130 pages before the book suddenly took a turn from whine-fest to:

Potboiler: A potboiler or pot-boiler is a low-quality novel, play, opera, film or other creative work whose main purpose was to pay for the creator's daily expenses—thus the imagery of "boil the pot" which means "to provide one's livelihood".

Pfefferkorn is caught up in a plot to destroy the politics of fictional (but real in the story) East and West Zlabia, home of a miserable people who exist on root vegetables.  From page 131 on, he IS the Hero of a Potboiler. At times I wondered if the shadowy government agencies that were fooling with him were just putting him through the paces so he could more effectively crank out the bestselling dross he hated. It all made no sense.

It also reminded me somehow of The Mouse that Roared and the Duchy of Grand Fenwick. The ending was just the kind of end priggish Pfefferkorn would have written for one of his own ideally existentially broken characters.
Posted by Librarian D.O.A. at 6:26 AM