An Interview with Mystery Author Bill Crider on Twitter 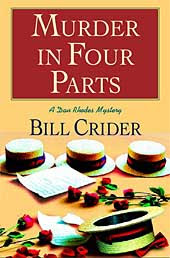 There I was, wondering how interactive Twitter could really be, and I had the idea of doing an author interview on Twitter.

I wrote to the ever humorous, ever low key, ever gracious Bill Crider via email and asked if he would be willing to try a five question interview on Twitter. I offered to let him know the questions in advance so he could try to stay within the 140 character limit, but he bravely said he would just answer the questions as they came.

Since we are in the same time zone it was easy to set a time to "meet". However, we couldn't see that the other person was there and ready to go, so its finky, as you can see.

Unlike other online interactive social sites, you can't tell if someone is logged in to Twitter until you see an "update" that they have typed in. Complicating doing a back and forth interview is the fact that you need to keep refreshing your screen to see new updates from others. So you type your question and "refresh" till you see the other person's reply show up.

Potentially, anyone "Following" you can see the interview, but they must "Follow" the person you're interviewing as well or they don't see the updates from both parties. Tricky stuff!

Bill has given me permission to post the text of the session here. I copied and pasted the text of my Tweets and His Tweets in order so the "conversation" is easier to read.

Thanks again to Bill for his time and for giving such fun answers to my questions.

librariandoa I thank him in advance for agreeing to this and for gamely deciding not to know the questions in advance.

librariandoa I of course cheated and typed in my questions to make sure they stayed in the 140 character limit.

librariandoa Since you can't tell when another Twitter-ee is online (that I know) we'll begin whenever Bill does a reply to this message :)

librariandoa Interesting, you can't see a response or update immediately as you can in a real chat space, you need to refresh your screen.

librariandoa...Checking email to see if he decided to mow his lawn instead :(

librariandoa For once I can write honestly what I'm really doing at this moment. Staring at my screen...

librariandoa Murder in four parts is your 16th Sheriff Dan Rhodes mystery. Do you have a Character Bible to keep track of your many side characters?

macavityabc@librariandoa No. Nobody told me I needed one until I'd already written five or six of the books. So I have to trust to memory.

librariandoa Along those lines & because I just read an Agatha Christie with her divine little maps, do you have a map of Blacklin County?

macavityabc@librariandoa No, that's another thing I wish I'd done earlier. I have one in my head, though. Sort of. It's an amorphous place.

librariandoa How do you decide what the next "main crime" will be in your novels?

macavityabc There's always a murder. Deciding who's gonna get whacked is the problem. I like to tie things in to a kind of theme. Chickens in #17.

macavityabc@librariandoa By the way I did a map for the Willard Scott books and sent it to the publisher. it was ignored.

librariandoa I would place your novels in two mystery sub-genres: cozy and humor. Do you agree with those?

macavityabc@librariandoa Yes, though I think there might be a little more mayhem in mine than in the usual cozy. Nothing graphic, though.

librariandoa Final question! As a dog lover who hasn't read all the books yet--why does one of Dan's dogs have to sleep outside? Poor doggie!

librariandoa I agree you have more mayhem than is usually allowed in cozies. Pickup trucks as instruments of death etc.

macavityabc@librariandoa Well, he likes it out there. You'll notice that he has a really nice house. He's not the indoor type.

macavityabc@librariandoa And the cat wouldn't let him inside, anyway.

librariandoa You live in a warm climate so maybe dogs are different down thereabouts.

macavityabc@librariandoa Yeah, he's very comfortable, and the insulate igloo is fine if it gets cold.

librariandoa Thats it for the scintillating interview questions, what do you think of Twitter as an interview medium?

macavityabc@librariandoa It was fun, but it's hard to keep the answers short.

librariandoa Isnt it though? Thats why I cheated and wrote them in to test it out.

librariandoa Thank you so much for talking with me this morning. It is nice enough to go out in the sunshine and rake the yard. Take care!

macavityabc@librariandoa You're welcome! It was fun. Have a good time with the leaves.

Visit Bill Crider's web site for more information the author and his work.

Read Bill Crider's Pop Culture Magazine for an update on every amazing thing that happens in the world as he unearths it.
Posted by Librarian D.O.A. at 12:10 PM