I'm really getting these posts in under the wire, aren't I?   Digging deep into my Pink Notebook, I have some factoids/tales of one of my old libraries for you.

The library was across the street from the jail.  Sometimes when you went out the front doors to go downtown for lunch prisoners would holler things at you.  There were a lot of people in at the library looking up local legal codes, let me tell you.

We were just up the street from the bus depot.  A lot of interesting people came through the library.

A customer who used to come in all the time researching really old comedians murdered his psychiatrist.

One of our clerks was obsessed with the Kennedys  and he eventually went berserk and had to be led away.

The security guard was very much like Don Knotts in the Ghost and Mr. Chicken.  He saw the ghost of Zane Grey in the basement frequently.

One man started wearing very short cutoff rayon or some slinky material as soon as it was warm.  We all dreaded what we might see peeking out, you know?  He was listed now and then in the local paper for "public urination"  a big problem apparently as it was regularly listed on the crime sheet.

Of course my other favorite local crime was the person who was caught slinking out with a bunch of Hostess Twinkies under their jacket at the small grocer's nearby.  Bad dog.

The original bookmobile driver was a sweetheart but periodically he just disappeared on a binge.

One of my coworkers taught me how to crochet.  Patient sweetie.

A guy we called ET with dark glasses and pink permanent hair curlers was a real disruption for awhile.  Lots of complaints about his bathing and putting those curlers in in our restrooms.  One day my boss had to talk to him about something else and ol' ET slammed his walking staff down hard on the floor in front of the boss and the boss jumped back three feet.  It shouldn't have been funny, but it was.

Running out of time, turning into a punkin' who didn't get in their post at midnight! Pleasant dreams! 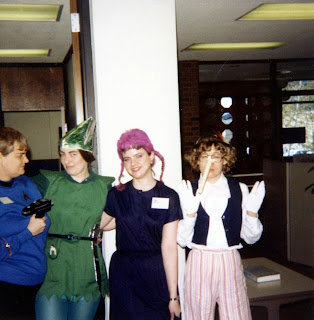