If I wondered that a new director might not work out so well for the second Hunger Games tale, I need wonder no more.  Francis Lawrence and his remarkable cast absolutely nails it.

The second book spent more time letting you get to know these children and adults who were being sent to die more than the first.  They didn't really give everyone that depth in the film version, but with 24 tributes it would be difficult.

The points at which Katniss sees that people are helping her, trying to make sure she lives are just so powerful.

All of the small and large ways the tributes and increasingly the people in the districts begin to rebel, to just quietly raise their hands in salute, I have no words for their bravery.

I felt sorry for Katniss in the books because she was a symbol for the masses and hope for everyone who saw her bravery, especially Prim.  She wanted only to take care of her family, not the world.

I left thinking I need to read Mockingjay again to refresh my memory, because I felt so bad for Peeta being captured and I don't recall what happens next.  The movie creates the same urgency to know that as the books did, quite an accomplishment.

Coming out of the theater the woman behind me told her companion conspiratorially "We can't tell anyone about this".     Obviously they don't want to spoil it for anyone, but it was funny they thought they could keep what happens a secret from everyone.


I have to mention the costumes for Jennifer Lawrence, that wedding dress, the transformation into a Mockingjay, the other flaming dress on the chariot....wow. 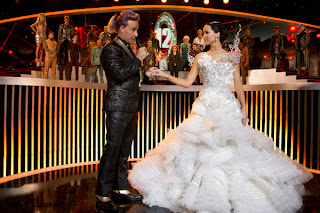